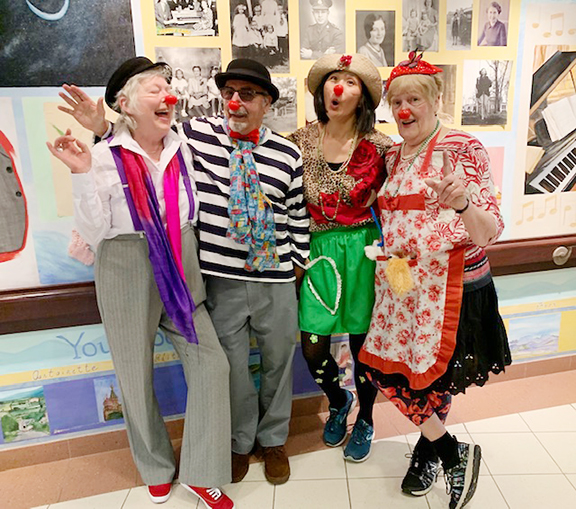 Bruce Brackett recently graduated from the Caring Clown program at Ryerson University at 80 years of age along with eight women who were also in the program.

This is a huge milestone for Brackett since he stopped attending school at a young age. He left Leslieville school in Grade 10 to provide for himself and his family.

Brackett went through some rough patches in life.His father was a veteran and fell ill. Throughout his life, Brackett took on different jobs ranging from driving trucks to to running the Leslieville News.

He has been a lifetime resident of Leslieville, and ran the paper in the neighbourhood with a circulation of 10,000 copies.

He said the paper was always given a positive response from Leslieville residents.

After the paper shut down, Brackett remained deeply involved in the community.

While thinking about what he wanted to do as he approached 80, he decided to take the Caring Clown course.

He said at one time he thought he would never go back to school, but he found the course to be both challenging and fun.

“I thought I wasn’t going to pass at first since there’s a little difference with teaching men and teaching women,” he said of the Caring Clown program. “But I struggled through and I can actually say that I learned from the teacher.”

He said he wants to use his clowing skills to help those living in long term care. Brackett said his favourite moments are when he makes the seniors laugh.

“You’re dealing with people with dementia or Alzheimer’s. You really need to respect them in their space,” Brackett said.

It takes a lot of energy and discipline to be a good clown, he said.

“You’re doing something you probably would’ve done when you were young. I mean there’s a clown in everybody. Everybody will say something that’s funny or will do something funny all their lives from the beginning. But it’s in us. We just have to bring out that clown again,” Brackett said.