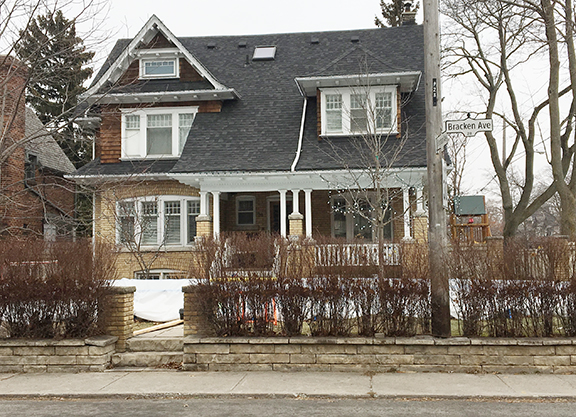 A heritage designation is being sought for this home at Bracken and Bingham avenues. Photo: Submitted.

Toronto and East York Community Council is expected to make a decision later this month on a heritage designation being sought for a home at 28 Bracken Ave. in the Beach.

The call to have the home designated as such was approved by the Toronto Preservation Board at its meeting on May 29.

The two-and-a-half-storey home, built in 1915-16, has been deemed to meet the criteria needed for a heritage designation according to a May 22 report presented by the City of Toronto’s Heritage Preservation Services, City Planning, Urban Design department.

That report stated the house “has a design value as an exceptionally finely-crafted example of Arts and Crafts architecture rendered in the Shingle Style which is evident in its complex massing of roofs and dormers integrating a deep veranda, the combination of a brick-clad lower storey with shingled upper stories and finely crafted wood elements.”

Located on the corner of Bracken and Bingham avenues, the home was first owned by Clara and Alfred G. Hill.

Its prominent location on a corner lot is another reason why Heritage Preservation Services has recommended that the home be given a heritage designation.

“Prominently sited on its corner lot and viewed from two streets, the house, with its complex massing of roofs, dormers and deep verandah and its finely crafted details including the complementary garage is a local architectural landmark,” the report stated.

The process to have a heritage designation for the house began earlier this year after its present owners, who purchased the home in 2016, submitted a request to demolish it and replace it with a new three-storey house and new detached garage.

A heritage designation would mean the city has the power to review alterations to the site, enforce heritage property standards and maintenance, and refuse demolition.

Beaches-East York Councillor Brad Bradford said that in situations such as these, the city must balance the need to protect heritage properties with the rights of property owners.

In light of the approval by the Toronto Preservation Board and the report from Heritage Preservation Services, he said he will be voting in favour of the heritage designation at the Toronto and East York Community Council meeting on June 25 at 9:30 a.m. in Committee Room 1 at Toronto City Hall.

“I don’t think this is intended to be restrictive towards new development, but a chance to preserve what is a special property and work with the owners to do that,” Bradford told Beach Metro News.

The final decision on the heritage designation is expected to be dealt with at the full Toronto Council meeting which takes place on July 16 and 17.