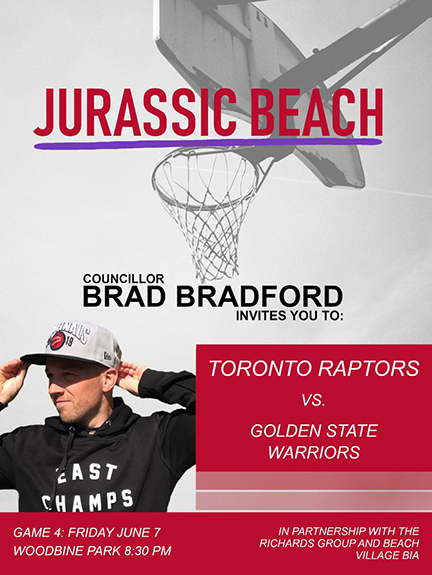 Jurassic Beach is coming to Woodbine Park for Toronto Raptors fans to gather together the watch the NBA Championship games.

Local Toronto Raptors fans can join together to cheer the team on in Game 4 of the NBA Championships on Friday, June 7, night as newly created Jurassic Beach will be open at Woodbine Park.

Jurassic Park downtown outside the Scotiabank Place is already world famous, filled with thousands of fans watching the big screens as the Raptors play the Golden State Warriors for the NBA crown. People line up hours in advance to get into the area which is put on by Maple Leaf Sports and Entertainment (MLSE), the owners of the Raptors

And now the fun will be expanding to East Toronto for the Raptors Game 4 against the Golden State Warriors.

After Wednesday night’s win, the Raptors hold a 2-1 lead in the best-of-seven championship final and Friday night’s game could give Toronto a stranglehold on the series.

Seeing the enthusiasm and excitement of fans watching the NBA playoffs in Jurassic Park over the past few weeks inspired Beaches-East York Councillor to see if some of the fun could be moved to the Beach.

“There’s so much excitement for the Raptors across the city and the country, and we as a community wanted to find a way to share that together,” Bradford told Beach Metro News.

And, indeed, it could be done as MLSE agreed to help set up a 20-foot big screen for fans to watch the game on and declare Woodbine Park to be Jurassic Beach on game nights.

Other versions of Jurassic Park have been springing up all over the GTA and across Canada since the NBA finals started, as fans want to share the team’s historic run together.

There are more than 30 Jurassic Parks in cities and towns across Canada, and the phenomenon is even going international with Raptors public viewing areas being created in countries including the Philippines, Mexico, the Dominican Republic and Italy.

Given its size and history of hosting large public events, Woodbine Park was the natural choice to host Jurassic Beach, said Bradford.

“Woodbine Park is one of the places where we are able to do this, so we approached MLSE and they were on board with us,” he said.

Also supporting Jurassic Beach is The Beach Village BIA and The Richards Group.

“It’s going to be great night and we want to see a large crowd out on Friday night and enjoy the excitement of watching the game as a community,” said Bradford.

He said Jurassic Beach will be promoting a family-friendly atmosphere for the game and alcohol is not permitted in Woodbine Park for the event,

Tip off for Game 4 is 9 p.m., but fans are encouraged to get to Woodbine Park (Jurassic Beach) early.

Jurrasic Beach will also be open for Game 5 of the NBA finals on Monday, June 10, night. Tip off for that game will also be 9 p.m.