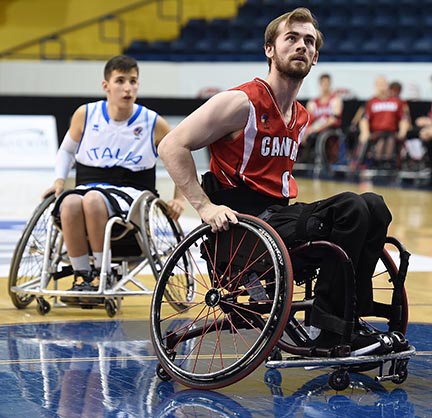 Lee Melymick competes for Canada in last year's World Championships. Melymick, who is also a member of the Variety Village Rolling Rebels wheelchair basketball team, will be playing for Canada in a game against Argentina later this month at the Toronto Pan Am Sports Centre. Photo: Submitted.

Coming off a recent second place finish at the Canadian Wheelchair Basketball League National Championships with his Variety Village Rolling Rebels team, Toronto player Lee Melymick is now looking forward to taking to the court for Canada in an upcoming exhibition game.

Melymick, 24, has been a member of the Variety Village team in southwest Scarborough since 2015 and soon established himself as a very strong player who drew attention from Wheelchair Basketball Canada who named him to their under-23 national team in 2017.

In 2018, Melymick was named to the Canadian Men’s National Team for the World Championships in Hamburg, Germany last August.

Later this month, Wheelchair Basketball Canada will be hosting both men’s and women’s international exhibition games in Toronto, and Melymick said he’s excited about playing before fans in his hometown.

“It’s a great opportunity for fans to come out and see what wheelchair basketball is all about,” said Melymick in an interview with Beach Metro News.

The men’s team will host Argentina at 10 a.m. on Wednesday, June 19 at the Toronto Pan Am Sports Centre in Scarborough. Admission to the game is free and everyone is welcome to attend. The crowd promises to be an enthusiastic one as a students from a number of area schools are slated to attend and cheer on Canada.

The Canadian Women’s National Team will host the Netherlands in a game on Thursday, June 13 at 7:20 p.m., also at the Pan Am centre. That game starts at 7:20 p.m. and admission is also free and all are welcome.

Melymick said those attending who have not watched a wheelchair basketball before game will be impressed by the speed and physicality of the sport, especially at the national team level.

“I love to see the surprise on people’s faces when they first watch a game,” he said. “They always tell me they had no idea how fast and how physical it was.”

Growing up in Etobicoke, Melymick was a strong athlete who played in a number of sports at Etobicoke Collegiate including basketball, baseball and football. He also played baseball for Ryerson University prior to suffering a workplace injury that put him in a wheelchair.

Melymick does not dwell on the past, but said that being athletic prior to his injury helped him be able to focus on taking up a new sport and dedicating himself to wheelchair basketball.

“Right after I got injured, wheelchair basketball filled the need for sports and I started playing at Variety Village and I don’t think I missed a practice for two years,” he said.

For more information on the upcoming games at the Toronto Pan Am Sports Centre, 875 Morningside Ave., please visit Wheelchair Basketball Canada at www.wheelchairbasketball.ca