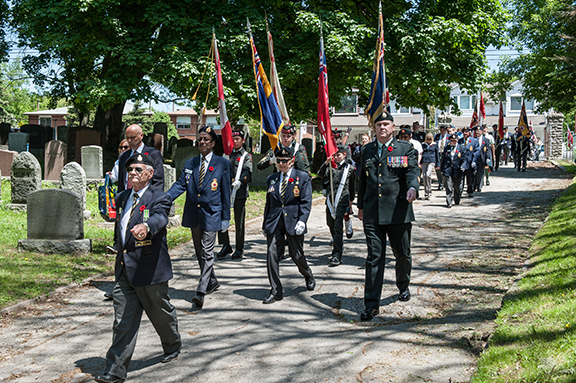 This Beach Metro News file photo by Victor Biro shows the parade to mark the 70th anniversary of D-Day which was held in 2014. The parade for the 75th anniversary is this Sunday, June 2, starting at Norway Junior Public School.

A parade to mark the 75th anniversary of D-Day will take place on Sunday, June 2 in the Beach.

Hosted by Zone D3 of the Royal Canadian Legion, the St. John’s Norway Parade and Memorial Service will commemorate D-Day (which took place on June 6, 1944).

The parade will head west from the school along Kingston Road and then north on Woodbine Avenue and into St. John’s Norway Cemetery through the Woodbine Gates where it will proceed to the Veterans Area in the cemetery.

Reverend/Padre Anthony Bassett will then officiate at a presentation and dedication ceremony in the Veterans Area which is marked by a cenotaph. There are more than 500 veterans buried in St. John’s Norway Cemetery.