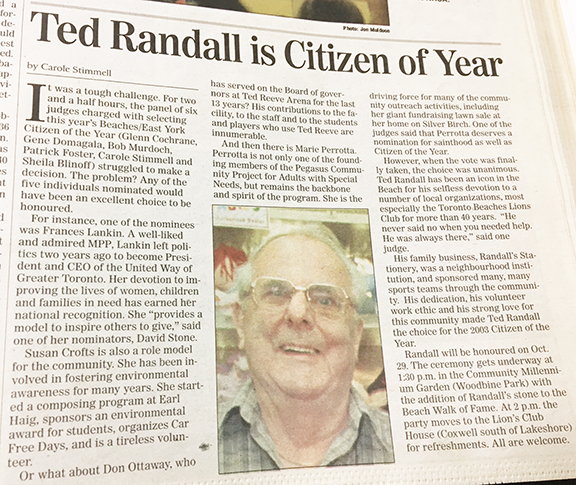 Ted Randall, who was Beach Citizen of the Year in 2003, died on May 27 at the age of 88. Visitation and funeral will take place this week in Oshawa.

Ted Randall, the longtime owner of Randall’s Stationery on Kingston Road, died on May 27 at the age of 88.

Randall died peacefully at Taunton Village in Oshawa with family by his side.

Born in September of 1931, he was known by everyone in the Beach and was the second generation of his family to own the store at 964 Kingston Rd.

Randall was also a member of the Toronto Beaches Lions Club and for more than 40 years was one of the main organizers of the Easter parades.

He was also named the 2003 Beach Citizen of the Year.

The October 2003 story in Beach Metro News announcing that Randall had won the honour pointed out that he was “an icon in the Beach for his selfless devotion to a number of local organizations.”

Randall is pre-deceased by his wife Barbara.

He was the father of Jeff (Beverly) and proud step-grandfather of Jenn and step-great grandfather to Hudson. He was brother to Robert, Paul, Gord, Carol and the late Eleanor.

A funeral service will held in the Chapel of the Oshawa Funeral Home on Friday May 31 at 11 a.m.

In lieu of flowers, the family is asking that donations be made in Ted Randall’s memory to the Alzheimer’s Society or to the Toronto Beaches Lions Club.

For more information on the visitation and funeral, or to offer online condolences, please visit www.oshawafuneralhome.com