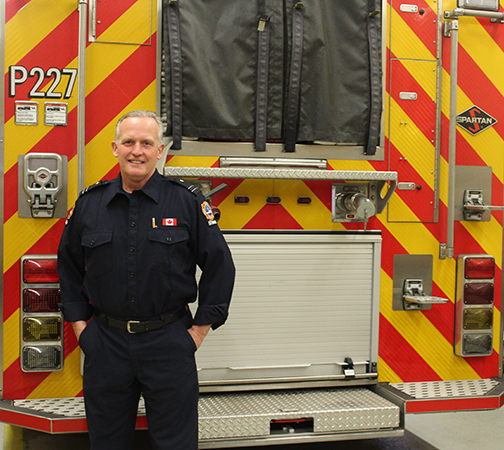 Doug Browne will be closing the door at the Beach fire hall for the last time on Wednesday, May 29.

A firefighter since 1984, and Captain at Beach Fire Station 227 on Queen Street East just east of Woodbine Avenue for the past 10 years, Browne will be retiring at the age of 62.

For Browne, retirement will not mean leaving the community he has lived and worked in for many years.

Browne grew up in the Beach on Hambly Avenue, attending Williamson Road and Glen Ames schools, and then Malvern Collegiate. His family roots in the community are deep as his mother Rodene also attended Williamson Road school

He took part in sports programs at the Balmy Beach Club while growing up, and he still plays men’s hockey with the club’s league.

Along with hockey, Browne also played lacrosse in the Beach while growing up. For many years he lived on Glen Manor Road and now more recently has moved to the Hunt Club area in southwest Scarborough.

“I’m a local boy at the local fire hall and it is very dear to me,” he said.

Browne began his firefighting career in 1984 when he joined the North York Fire Department. He’s a carpenter by trade and worked in the business before deciding to apply to be a firefighter.

“I loved being a carpenter but I needed more security,” he said.

Also, firefighting was in the family as his father Bill was a firefighter with the then City of Toronto Fire Department.

“I think my dad was smiling. He knew I was coming one day to be a firefighter,” said Browne.

His first job with the North York Fire Department was at a station up near York University.

“That was about the furthest I could be away from where I lived, but it was still good to be on as firefighter,” he said of that first posting.

As his career progressed, he was able to work his way south and finished up with the North York department at a station on Bermondsey Road just before megacity amalgamation at the start of 1998. That amalgamation merged not only the six former municipalities that made up what had been Metro Toronto, but it also combined all of their individual fire departments into one Toronto Fire Service.

Browne had just passed the North York department’s captain’s test prior to amalgamation, which led to numerous changes in the way fire services were delivered and how the city would be divided and who would be working where, so he was not sure what was going to happen next or where he would be assigned so he applied to be at the Beach station.

“A guy said to me to put my name in the hat and I’d be walking to work in a couple of weeks,” Browne remembered.

It wasn’t quite that fast, but he was Acting Captain at the Beach station in 2001 and has been Captain for the past 10 years.

He said the station, the firefighters who work in it and their pumper truck play a role in the community far beyond responding to calls.

“We go to a lot of social functions, have students in and we do all the school fun fairs, and we love it,” said Browne.

And being local, Browne said he often meets people he knows when on calls, community events or simply walking by the station when he is outside.

“We have a little ritual that when we back the truck back into the station that I am the guy that closes the door,” he said. “I always look around before I go in to see if there’s anyone I know and need to say hello to.”

But before Browne closes that door for the final time, there’s the matter of his retirement party which is set for the evening of Thursday, May 23 at the Balmy Beach Club.

The party is open to everyone to attend and gets underway at 6 p.m. Tickets are $20 and can be purchased at the door of the club or in advance at the fire station.

The Balmy Beach Club is located at 360 Lake Front.