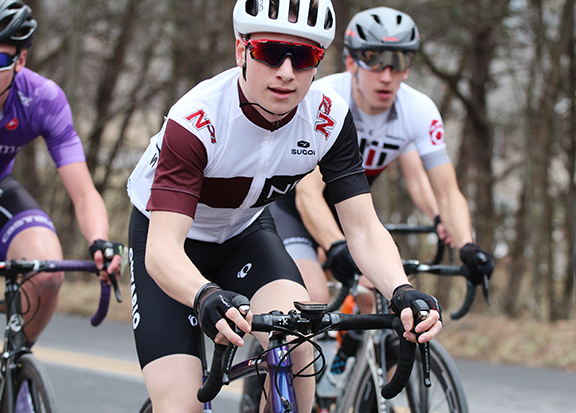 Axel Froner, Grade 12 student at Neil McNeil Catholic High School, is shown in this photo on his way to victory at the Bucknell Cycling Classic in Pennsylvania. Photo: Submitted.

Neil McNeil Catholic High School Grade 12 student Axel Froner is proud of his many cycling achievements and wants to share his success.

He started biking at 11-years-old and became very passionate in his late teens. Now he is doing lengthy and vigorous rides not only for fun but to train for competitions.

As a child, he was inspired by his father and grandfather, Richard and Alois Froner, as they took part in various cycling races. His love for bikes led him to work at Cycling Solutions, a bike store, where he has the luxury to explore and understand different facets of biking equipment.

He’s also getting help from his family as he pursues his cycling career. Adelaide Froner, plays a big role in her brother’s social media reputation. The animation student at Algonquin College, edits and posts all videos, pictures and competitive events that Axel takes part in.

Practice, practice and more practice is a key to success. said Froner.

“I train six days a week. Racing is the best training. Go out there for long rides. Racing hard against the older guys really gets you faster,” Froner said. ” Keep training consistently and always do what the coach tells you.”

His parents, Mary Barron and Richard Froner, are thrilled with their son’s academic and cycling success.

“We are incredibly proud of Axel’s accomplishments, commitment and work ethic,” his parents said in an email.  “We are also impressed with his positive attitude, respect for others and gratitude for all he has achieved.”

“Cycling has given him the opportunity to travel internationally, meet people and learn about various cultures which has helped him develop his personality.”

The countries that Froner has competed in are Belgium, Spain, Netherlands and the United States. He likes racing in Belgium because the country is as well known for cycling as Canada is for hockey.

During a recent interview at the Beach Metro Community News office, Froner talked about why he enjoys cycling.

“Always like what you do. You can’t do it because you think you have to. Because you won’t be good at it. If you are forcing yourself to do something, you will never succeed.”