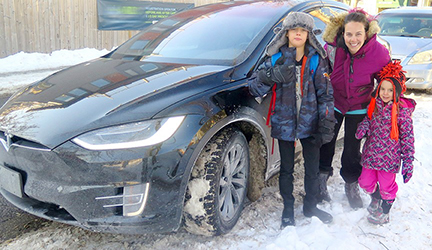 Christy L. with LIan, Kara and their Tesla. Photo by B.F. Nagy.

Christy and Carl L. live in the southern part of the Beach area with their three children and an electric car made by Tesla. Christy works for an organization that provides emergency housing for victims of human trafficking crimes. Carl is a successful local realtor who has been an electric car enthusiast for years. They have owned a Smart Car and two Teslas.

“We will probably keep this one for a long time,” says Christy, “because when we ordered it there was a special deal offered that entitles us to free supercharging for life.”

Supercharging is a special Tesla system that provides users with fast recharging at public locations for long trips.

Today’s Teslas and other electric cars have fairly capable batteries that will take you well beyond 300 kilometres on a single charge, so most charging  (80 – 90 per cent) is done by owners at home.

Christy and Carl sometimes take the kids up to a cottage on Lake Rosseau in the Muskoka area. “There’s a supercharger in Barrie,” says Christy. In North America there are now about 25,000 public chargers with thousands more being added continuously.

As we mentioned in a previous article, there are many persistent myths circulating about electric vehicles. The most important one to dispel relates to their cost. Although they were quite expensive in the early years, that is not really true in the modern day. Tesla recently announced a base price of US $35k for its Model 3 car. It also introduced a new SUV called the Model Y that starts at US $39k.

Once you add options and convert to Canadian dollars, the price can still seem prohibitive, but there are hundreds of other electric vehicles becoming available in Canada, many of which are less expensive than a Tesla. In addition, most electric car owners save $200-$300 per month on fuel, and 50- 75 per cent on maintenance.

Obviously these are significant reductions in your monthly bills, and they allow you to drive in an environmentally responsible, quiet and safer vehicle. Electric automobiles have higher safety ratings because of their low centres of gravity and structural design advantages.

Despite the fact that oil companies spend millions to hire PR people to spread misinformation about electric cars, North Americans are buying them like crazy. We bought about 400,000 in 2018, an increase of more than 100 per cent. And electric car sales are already well ahead for 2019. Most transportation experts think we won’t be buying gas cars any more by 2030 or 2040.

The best selling electric car in the world right now is the very affordable Nissan Leaf, which starts at about Canadian $36k and will save you probably $20k on gas and maintenance. If you need a new car, it might be time to start thinking electric.

BF Nagy is a long time Beach resident and author of a new book, The Clean Energy Age. He has interviewed more than 700 experts and written 155 articles on clean energy. The Clean Energy Age is available online, from your favourite bookseller or bfnagy.com. It contains expert solutions, success stories and top 10 lists of climate actions for homeowners, business managers, government people and others.