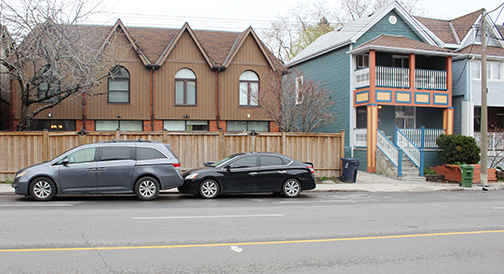 Two parked cars were damaged after a driver lost control of his car early this morning on Woodbine Avenue south of Queen Street East. The 25-year-old male driver of the car suffered life-threatening injuries in the 2 a.m. crash on May 7. Photo by Alan Shackleton

Calling it a double-lane highway running between two residential areas, a Woodbine Avenue resident says traffic must be slowed on the road south of Queen Street East.

Cathy-Anne O’Brien made the comment in the wake of a crash in front of the house she is living in on Woodbine Avenue at 2 a.m. on Tuesday, May 7, that has left a 25-year-old man with life-threatening injuries.

O’Brien said she and her husband heard the sound of the car hitting a hydro pole just north of the curve where Lake Shore Boulevard East ends and becomes Woodbine Avenue.

“We heard one bang, then we heard a woman screaming and it was horrifying,” O’Brien told Beach Metro News Tuesday morning. “And then we heard another bang.”

The first crashing sound was the hydro pole and part of a front porch planter being struck, and the second bang is believed to be from the vehicle that crashed then striking two parked cars on Woodbine Avenue.

Tuesday’s crash took place just two doors north of an earlier accident on Woodbine in which the driver of an SUV lost control and hit the front porch of a house on the east side of the road on the morning of Saturday, Jan. 20.

A resident in the house that was struck in January called for speed reductions and increased traffic safety measures in the area after that crash. See our story at: https://beachmetro.com/2019/02/06/resident-calls-for-increased-safety-measures-at-woodbine-and-lake-shore-after-car-hits-house/

At that time, Sheila Snowball said “Everybody in the community walks by my house in the summertime and admires my flowers. I don’t want my flowers to be a memorial for someone’s death one day.”

O’Brien is also calling for traffic in the area to be slowed down.

“It’s a horrible stretch of road. You take your life in your hands trying to back out of the driveway,” said O’Brien.

She pointed out one of their vehicles which was struck was parked on the road this morning because it is so dangerous to back out of the driveway.

“There’s nothing to slow them down,” she said of drivers who routinely speed along that stretch of Woodbine. “It’s a double-lane highway right before you leave and enter a pedestrian area.”

O’Brien said something needs to be done to slow drivers down. “Maybe it’s speed bumps or something else.”

She added cars being driven too fast and too aggressively is a problem throughout the Woodbine and Queen area. “Speed is definitely an issue. There are kids and pets in this neighbourhood and it’s infuriating.”

“Our streets needs to be safe for everyone,” he said. “Two accidents on the same portion of Woodbine within months is completely unacceptable. I have been in touch with Transportation Services to look at short, medium and long term measures to increase road safety in this portion of Woodbine. My office has also reached out to the Superintendent of 55 Division to ask for an increase of enforcement measures so we can deter unsafe driving like we saw this morning.”