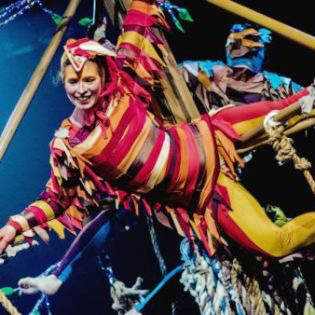 The WeeFestival of Arts and Culture returns to the stage as it makes its change to an annual event – now with a spin on a younger audience approach.

The festival will be held from May 11 to May 20 with this year’s performances and arts dedicated to a younger audience. This year’s festival will be geared towards theatre goers in their early childhood with music, theatre, puppetry, dance and aerial arts.

The highlights of the shows will include performances from Children’s Garden and aerial arts from Tweet Tweet! and Flying Hearts. Along with this, there will be theatre shows from Motaek and the Missing Star and Mwana and the Turtle’s Secret.

Artistic director of Theatre Direct, Lynda Hill, explained that the entire mandate of the festival was chosen for children under the age of six.

“From the beginning we saw that was very little art being created with the children,” Hill said.

“Arts and culture are not only the right of every child, but they’re also integral to their development from birth.”

The WeeFestival has also made sure performances would be available to all children by featuring accessible and audio described programming for the event.

Venues for the festival will include the Assembly Hall, the studio of Le Théâtre français de Toronto and the Fraser Mustard Early Learning Academy. Another one of the venues the shows will be featured at is Leslieville’s very own Redwood Theatre.

Hill added that Redwood Theatre was chosen for the list because of its theatre and art history. Theatre Direct also partnered with Redwood in the Fall to bring shows like Old Man and the River to the community.

“We love the Redwood, we thought it was a great choice for a partnership,” Hill said. “That  neighbourhood is just blooming with young families.”

Tickets for the event are now available to purchase and run from $12 to $15.

More information on the dates and performances of the WeeFestival can be found at www.weefestival.ca