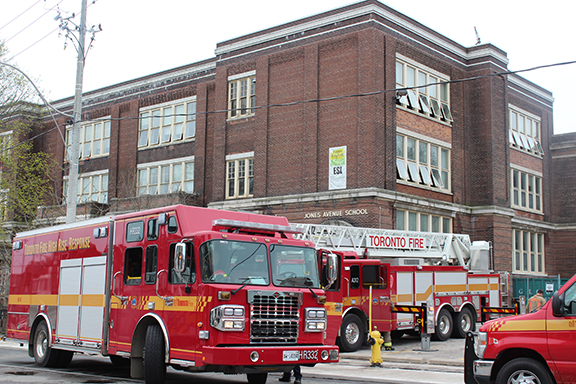 Fire vehicles outside the Jones Avenue Adult Learning Centre on Tuesday morning. The cause of Monday night's fire is still under investigation. Photo by Alan Shackleton.

The more than 250 adults who are students at the Jones Avenue Adult Learning Centre have been relocated to other Toronto District School Board facilities in the wake of a fire Monday evening that damaged the school.

The blaze broke out just before 5 p.m. on May 6, and at one point in the evening flames were visible on the roof of the three-storey school located on Jones Avenue between Danforth and Strathcona avenues.

The school offers a number of adult learning programs including English as a Second Language (ESL) and has a total of about 270 students, according to the TDSB.

For now, some of the ESL students have been relocated to the TDSB’s site at nearby 16 Phin Ave. Students in other programs are being relocated to different TDSB sites.

It is not known how badly the school was damaged and when students might be allowed back.

For now the building will remain closed.

Toronto firefighters were called out to the school just before 5 p.m. yesterday, and had to rescue seven roofers with an aerial ladder truck in the early stages of fighting the fire.

At one point it was a four-alarm fire, with flames and smoke visible throughout the surrounding neighbourhood. A four-alarm fire means that between 18-21 firefighting vehicles were deployed to the call.

There were no injuries in the fire, and a cause is not yet known.

Toronto-Danforth Councillor Paula Fletcher was out at the scene of the fire Monday night and said there was a lot of “acrid” smoke in the neighbourhood while firefighters battled the blaze.

“Everyone is relieved the fire was gotten under control,” she told Beach Metro News on Tuesday.

While the closure of the Jones Avenue school is a major inconvenience for its adult students, Fletcher pointed out it would have been a lot worse if the school was still teaching children.

“Children would have had to be staying home or be relocated,” said Fletcher, comparing the impact of the Jones Avenue fire to the one at York Memorial Collegiate in the west end of the city.