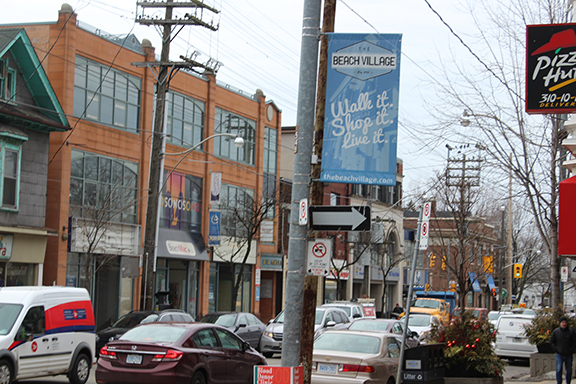 A Case Study on how to revitalize Queen Street East is in the works, Beaches-East York Councillor Brad Bradford told a community meeting recently.

Beaches-East York Councillor Brad Bradford opened his community meeting last week with an update on the provincial government’s planned TTC upload, which will be tabled today at Queen’s Park.

“After spending years on consultations, designs and approvals, the province threw a grenade and blew all that up,” Bradford told his packed community consultation meeting at the Naval Club of Canada on the evening of Wednesday, April 24.

He explained that Toronto Council did not hear back from the provincial government after they wrote a letter asking to discuss the upload, which will give the province control of transit expansion projects in the city, in good faith. However, no agreement on terms was reached and the province tabled the legislation today.

At the meeting, Bradford also updated residents on a variety of other items in Ward 19 Beaches-East York including:

STANDARDIZED PARKING PERMITS: A current study being conducted on a standardized parking permit system. Feedback from residents, he said, was that all streets and neighbourhoods are different and should not be a ‘one-size-fits-all’ system. He said that It will be a democratic process and will bring that approach to city council.

WHEEL FLATS: Resident have been complaining of extreme levels of noise from the subway’s emergency braking system. A motion to deliver a report back to the TTC Board with timelines and root causes is expected in May.

HANSARD: Bradford’s motion to make transcripts of city council meetings available was passed. A report exploring the feasibility of transcribing meetings will be available this year.

VISION ZERO POP-UP: The councillor put forward a motion to transform Danforth Avenue between Woodbine and Woodmount Avenues for one weekend this summer into a “complete street” by adapting Vision Zero’s safety initiatives. More information on this motion is available on the City of Toronto website.

IMPROVEMENTS ON O’CONNOR: Numerous improvements to the street, such as road reconstruction, streetscape improvements, green infrastructure and basement flooding protection upgrades are slated for O’Connor Drive from St. Clair Avenue to Bermondsey Road. Construction will take place from September 2019 to October 2020.

QUEEN STREET CASE STUDY: A case study on how to revitalize Queen Street East amid the changing landscape of retail and rising costs of rent are is in the works. There are no definitive dates on this study but the councillor said that he intends to start the conversation again amid resident complaints of inaction on this topic and the loss of the area’s “small town feel”. He also informed residents that there is currently a plan to introduce low-rise buildings in the area, up to six stories, as part of the city’s plan for incremental development.

WOODBINE AVENUE: Bradford renewed his campaign commitment to improve Woodbine Avenue The plan will start with improving intersection clearing at Woodbine Avenue and Gerrard Street East. There will be a planning meeting at Stan Wadlow Park on May 9. All residents are welcome to attend.

The city, he said is one of the “leading cities in this regard.” There is currently a plan to retrofit every building in the city (1.1 million) to decrease carbon emissions by 40 per cent. The following are the programs and incentives residents can take advantage of to retrofit their homes:

You can visit the City of Toronto and Province of Ontario websites for more information.

City of Toronto Planner, George Pantazis topped off the meeting with an overview of how cities are planned and built under the Province of Ontario guidelines.

He informed residents of the province’s new guidelines, which state, in part, that the City of Toronto must start building “up” and cease to build “out”. This means that residents can expect more high-rises and more new developments near transit stations. Laneway suites are also a new trend in development, he said.

Bradford’s next community meeting is scheduled for June 13th at 6:30 p.m., with the location to be announced.