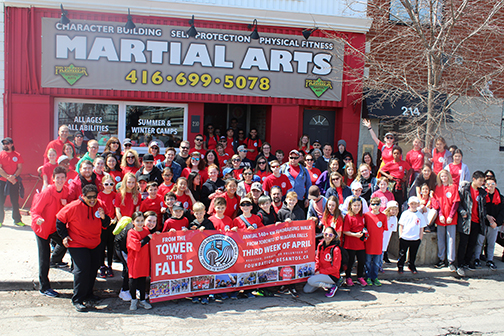 Members of DeSantos Premier Martial Arts set off from the Main Street location on April 13 for the Friendship Walk. Photo by Alan Shackleton.

The walk is a fundraiser for the non-profit DeSantos Foundations which supports a number of local and international initiatives including school breakfast programs, the Red Door Shelter, and supplies and scholarships for students in Guyana and the Phillipines.

DeSantos Premier Martial Arts has studios on Main Street, just north of Gerrard Street, and on Gerrard Street near Broadview Avenue. Founded by Veronica DeSantos, the studio is celebrating its 30th year of offering martial arts to the east Toronto community.

The foundation was formed as a way to give back, and a pair of walks serve as its major fundraisers.

The one-day Friendship Walk took place on Saturday, April 13 and covered five kilometres from the Main Street to the Gerrard Street DeSantos locations.

The walk from Toronto to Niagara Falls takes place in four one-day portions from April 23 to 26 and is about 145 kilometres in total.

Participants can choose to walk for one day, all four days or any combination of days.

DeSantos told Beach Metro News in an earlier interview that she chose the walks as the organization’s fundraising events to make it easier for everyone in the community to be involved.

“I wanted to have something more substantial so that anybody of any ability or capability could do and be a part of,” she said.

For more information on DeSantos Premier Martial Arts or how to participate in or sponsor the walks, please visit www.desantos.ca