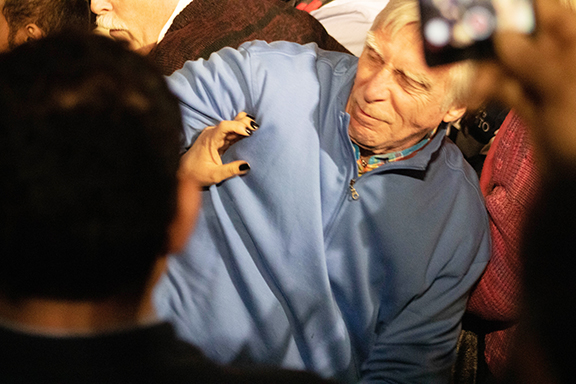 An incident involving this man and Vanessa Gray at a Climate Action Rally with Prime Minister Justin Trudeau on March 4 resulted in Gray being pushed to the floor of the Danforth Music Hall. Photo by Rushanthi Kesunathan.

A protesting First Nations woman who was pushed to the ground during Prime Minister Justin Trudeau’s Climate Action Rally at the Danforth Music Hall on March 4, says the prime minister “witnessed” her being assaulted, and “did nothing.”

The woman is 26-year-old Vanessa Gray, a community organizer from the Aamjiwnaang First Nation. In a press release written a few days after the incident, Gray said it is disturbing that many of the people who attended the event, including Trudeau himself, did nothing.

At the event, Trudeau was interrupted several times during his speech by hecklers and protestors in the crowd, who were immediately ushered out by security.

Gray said she went to ensure that the voices of Indigenous people were present and draw attention to the ongoing colonial and environmental violence that indigenous people experience in Canada.

Before arriving at the event, Gray hid a Canadian flag in her shirt that said, “No Justice on Stolen Native Land.”

She said it was to remind those at the event that ground zero of environmental violence is occurring right now on unceded land.

Videos and photographs of the incident have been making the rounds online.

During Trudeau’s speech, Gray threw her flag and shouted “No Justice on Stolen Native Land.” Seconds later, an older white man, in a blue shirt, pushed her down to the floor.

“Shocked, but not deterred I rose up and continued to speak, ‘No Justice on Stolen Native Land.’ I said this over and over until security pulled me from the rally,” she wrote in her statement.

While Gray was quickly escorted out, the man, who is yet to be identified, remained inside the event and continued to cheer Trudeau on.

In a video taken during the event, Trudeau can be seen witnessing the scuffle and uttering “Oh boy, oh boy,” moments after Gray is pushed to the ground.
Gray has been speaking up against environmental violence for eight years.

She and her lawyer Nick Cake, with Millars Law, are considering her legal options. Cake said they are in a preliminary stage and are reviewing all options and working to determine the best possible path.

“Our options include filing a police report because police didn’t take any action on that day. Another avenue will be civil remedies that may be available. Another would be to leverage a conversation between Vanessa and the prime minister’s office,” he said.

“Situations like this have a way of fizzling off and falling off into the background and essentially being forgotten about. It’s our intention to keep this fresh and to keep it going so it does not become outdated or a situation that lacks the public’s interest,” Cake said.

In an email statement, Liberal Party spokesperson Parker Lund said the safety of all Canadians attending such events is a top priority and that the incident has been brought to their attention. The party is taking steps to review the matter with the appropriate authorities and staff, Lund said.