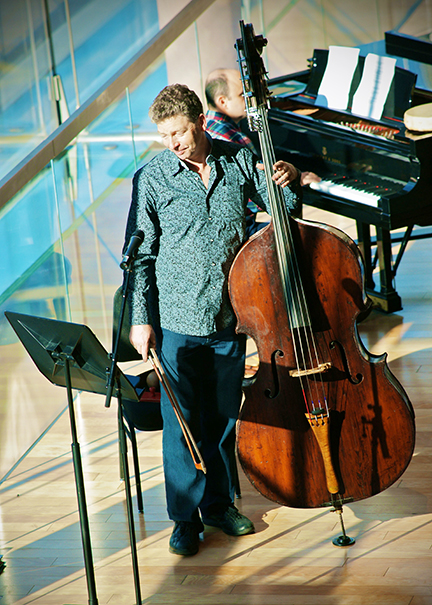 In an era where tablets have replaced colouring books, and streaming has made it easy to consume only the content you are comfortable with; it begs the question of whether children need better guidance to explore the cultural world.

For Timothy Dawson, bassist at the Toronto Symphony Orchestra, a good childhood involves being exposed to everything. “It is the only way that one can widen their mind,” he said.

Crediting his success to his family, mentors and the lack of a television, he firmly believes that his strong connection with music exists because of the exposure to it that he received in his early years.

“My father was a pianist and church organist. He loved to sing. And my mother loved to entertain. My father would sing around the piano for guests,” Dawson said.

In hopes of building his own guitar, a young Dawson visited a music shop to buy a part. This became a remarkable encounter that he recalls more than 40 years later.

“I felt like I was in a magical world, I mean my eyes were just bugging out of my head. The music was just so beautiful, and I ended up asking my mother if I could take guitar lessons.”

For him, hearing the store’s owner play classical tunes on his guitar with an accompanying harmonica was the deciding factor in his decision to pursue music professionally.

At the time, The University of Alberta had started a music teaching program for kids. Dawson’s family signed him up for flute lessons. On the first class, he and other students were lined up and evaluated according to their height and embouchure. Dawson’s tall stature led him to be chosen to play bass.

Comparing the episode to the Sorting Hat scene from Harry Potter, Dawson was grateful it happened. “I would’ve been a terrible flute player,” he said.
Like the wands in the wizarding world, Dawson said it is the instrument that chooses its player, not vice versa.

An upcoming concert in April will feature the Instrumental Petting Zoo which will give kids the opportunity to see, hear, touch and try instruments. The goal is to give children an interactive introduction into the world of classical music.

Also, the Kingston Road Village Concert Series’ presentation of Let’s Hit Something this Sunday, March 24 by the TorQ Percussion Quartet will feature a percussion workshop for all ages prior to the performance. Admission to this concert is also free for children.

One could say that Dawson attempts to recreate his own version of the Sorting Hat moment for young, prospective musicians.

As more and more schools cut arts programs and lose government funding, Dawson feels that students lose opportunities to think critically and have an independent mind.

Acknowledging that classical music has a reputation as being complex, he hopes to provide an affordable and accessible avenue for parents, children and students to explore and enjoy the genre.

Dawson joined the TSO in 1980 as its youngest ever member at that time. Since then, younger members have joined.

Recalling his experiences with several great musicians (Tom Monahan, Franco Petracchi, Stuart Knussen) he credits his success to his mentors.
He recalls his audition with the TSO, one of the most important reviews of his life.

Having prepped rigorously with his then mentor, Stuart Knussen, he found the audition easy compared to previous expectations. The moment when it was announced that the job was offered to him, became a defining moment in Dawson’s life.

“I just about fell over. I didn’t have to go to the second round. These are the days that changed my life. I’ve had the best education. I’ve travelled the world. My job is the exact opposite of a desk job,” he said.

As a way to pay-it-forward, Dawson teaches music at the University of Toronto and finds time to offer advice to students at the National Music Camp of Canada.

“I was given so much attention. My teachers shared their passion in such a generous way. And I want to pass on my version of what I was given,” he said.