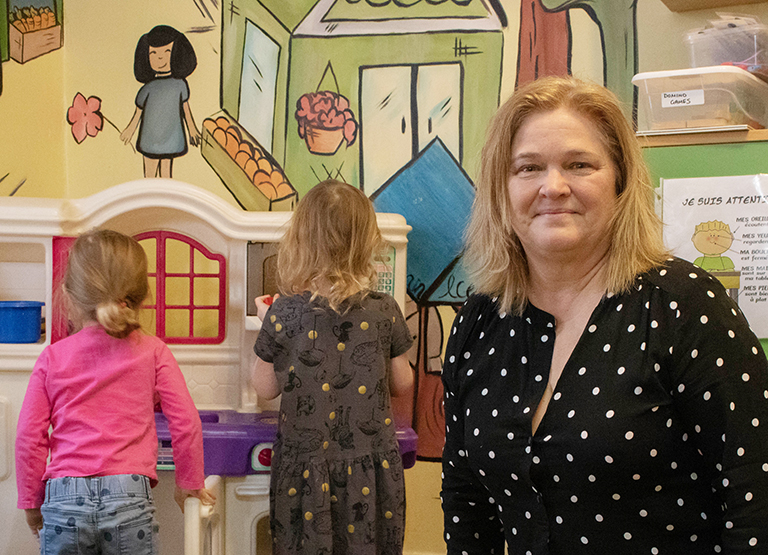 Donna Lynn Watson, who opened the Healthy Earth Bilingual Nursery School in the Beach in 1992, will be retiring at the end of this school year. Photo by Rushanthi Kesunathan.

Healthy Earth school is closing its doors and saying goodbye to the community after 27 years in the Beach.

Donna Lynn Watson, founder and director of Healthy Earth Bilingual Nursery School, opened the school in 1992. She was motivated to teach young children more than just play, but also to teach them about the environment and our role in it.

When you enter the doors, you’ll immediately be filled with a sense of warmth and positive atmosphere.

Here, its youngest learners not only get a head start in learning but a second home. And, they’re not just taking big leaps toward academic learning, but in life.

“The children are learning to ask critical questions about the world around them and participate in fundraising to help out both locally and globally,” Watson said.

Before opening the school, Watson had a short-lived acting career both in television and on stage. Her acting career brought her to upstate New York where she worked in a private theatre company.

“I worked with very young children in New York. I was directing them, teaching them how to memorize lines, and think critically,” Watson said. “I understood the power of teaching children through theatre.”

Early childhood education is powerful and children are capable of learning more than we adults give them credit for, she said.

After returning to Canada, Watson went back to school to earn her Early Childhood Education degree.

“I noticed that many schools were play-based only and did not offer the kind of learning environment that I believed in,” Watson said.

She then started working at various schools in the Beach and realized the approach to teaching and educating children did not match with her educational philosophy.

“The goal here was to help children develop an awareness that ‘WE’ are not alone on this planet and we have an obligation to all,” Watson said.

An example of this awareness approach was involving the school community in fundraising for WE Charity (former Free The Children) reaching out globally and helping out with local charities too. With the global charity, Healthy Earth BNS has raised an estimated $17, 000 over the years. With those funds, Healthy Earth BNS was able to help support education for children in both Africa and India, install water-wells and contribute to local health clinics.

Watson and her team created a month’s worth of curriculum about Africa while she herself travelled there with like-minded educators to experience first-hand where the help goes. With that said, the children back home at Healthy Earth BNS were involved in learning about the challenges children from around the world face through the amazing curriculum the teachers had prepared for them.

So here we now stand, and in a few months Watson will say goodbye to her school, staff, parents and her eager young students.

“Twenty-seven years is a long time, I love the school and what we offer, but the timing feels right to say goodbye and start my new chapter” Watson said.

Watson’s husband retired last month, and she will join him in June.

Now, besides still running the school, Watson is helping her staff find new jobs and her students new placements.