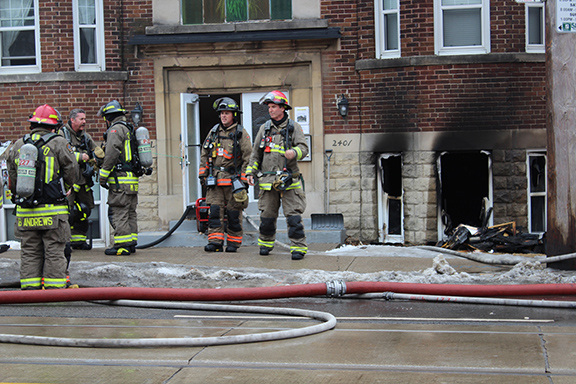 Damage can be seen from a basement apartment window at 2401 Queen St. E. after a fire late yesterday afternoon. Two people were treated for minor smoke inhalation at the scene. Photo by Alan Shackleton

A woman and a man were treated for minor smoke inhalation after a fire at a three-storey apartment building on the southeast corner of Willow Avenue and Queen Street East in the Beach Wednesday afternoon.

They were treated at the scene by paramedics.

Toronto firefighters were called to the fire at the Royal Oak apartment building at 2401 Queen St. E. at approximately 4:15 p.m. on March 13.

When firefighters arrived there was heavy smoke and visible flames coming from a basement apartment at the front of the building.

According to Toronto Fire Services the building had already been “self-evacuated” and firefighters quickly extinguished the blaze.

Fire crews then cleared the building of smoke using “positive-pressure ventilation” and tenants in unaffected units were back home that night.

The two-alarm fire saw numerous fire trucks and other emergency workers respond to the area.

Queen Street East between Silver Birch Avenue and Beech Avenue was closed to traffic for a number of hours Wednesday night.

Cause of the fire is still under investigation and there is no estimate on damage.