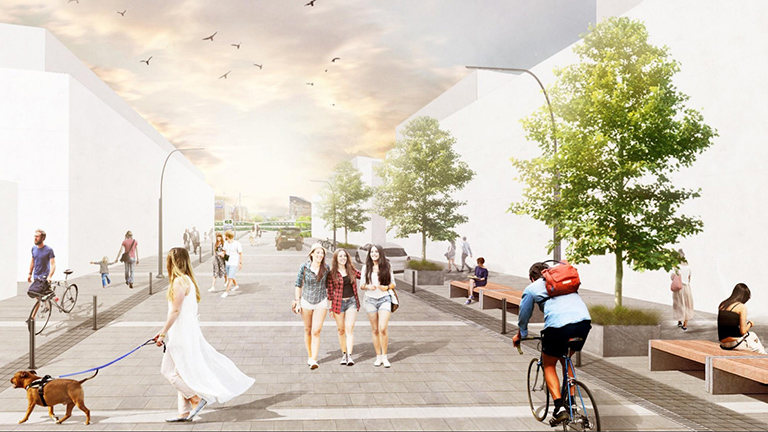 A new connection from Dawes Road to the Danforth GO station is among items proposed in the Main Street Planning Study. Image: Submitted.

The City of Toronto hosted the second community meeting for the Main Street Planning Study recently, and concerns about how the new developments will impact the neighbourhood was at the forefront of the discussion.

Beaches-East York Councillor Brad Bradford kicked off the Monday, March 4 presentation, referring to the proposed east Danforth plan as “the first cut of ideas” in the “heart of the community”.

The area of study is approximately 28 hectares, or according the City of Toronto, 28 sports fields, that sits roughly from Main Street and Danforth Avenue, south to Gerrard Street, with borders at Dawes Road and Ted Reeve Drive on the east side.

More than 75 people attended the meeting at Hope United Church, and some community members wanted to know how the city is going to address traffic congestion, lack of affordable housing and sewage issues that proposed development to the area will bring.

One resident said that increased traffic resulting from new developments in the area is “not feasible” with Main Street being only one traffic lane in each direction. The current “extreme traffic conditions” have resulted in traffic jams and speeding cars from Gerrard Street and Woodbine Avenue, up to Danforth Avenue, the resident said.

Other residents wanted to know what is being done about sewage issues causing flooding around Stephenson Park and surrounding streets, as well as how the city is going to meet the increased demand for affordable housing.

City of Toronto Senior Planner Daniel Woolfson, who hosted the meeting, said that the purpose of the study is to explore new and different opportunities in the area.

“This area is blessed with transit”, Woolfson said.

He added that the new developments are within five to 10 minutes walking distance from the Toronto Transit Commission’s Main subway station and the Danforth GO station and are purposefully designed to encourage use of public transit.

The Main Street Planning Study, he continued, leverages the existing transit infrastructure in the area to create growth, which includes a mix of residential and employment land uses that are supported by transit accessibility, new public spaces and improved community services and facilities, along with increased pedestrian walkability in the area.

The new development is already in-line with an existing City of Toronto policy to protect the current affordable rental stock and create new affordable family-sized and single units in the neighbourhood, he said.

Woolfson added that the city shares results of the report to the Toronto District School Board.

As for current traffic safety and sewage issues, Woolfson directed  community members to address those issues with their city councillor.

After the first community consultation meeting on June 13, 2018, the city collected the following feedback from the community:

The feedback from the first meeting was developed into the new framework and key features for the proposed plan were established: (See map). After feedback from this framework is collected, city staff will start specifying building heights and location sizes of public parks and midblock connections.

Once that is completed, the city will present their findings at a third community consultation meeting. The time and date for the third meeting is to be announced.

The Main Street Planning Study began in Nov 2017 with a provincial government mandate to create “complete communities” in existing neighbourhoods.

Residents can still submit their feedback and questions to Daniel Woolfson, Senior Planner, at Daniel.woolfson@toronto.ca or George Pantazis, Planner, at George.pantazis@toronto.ca.