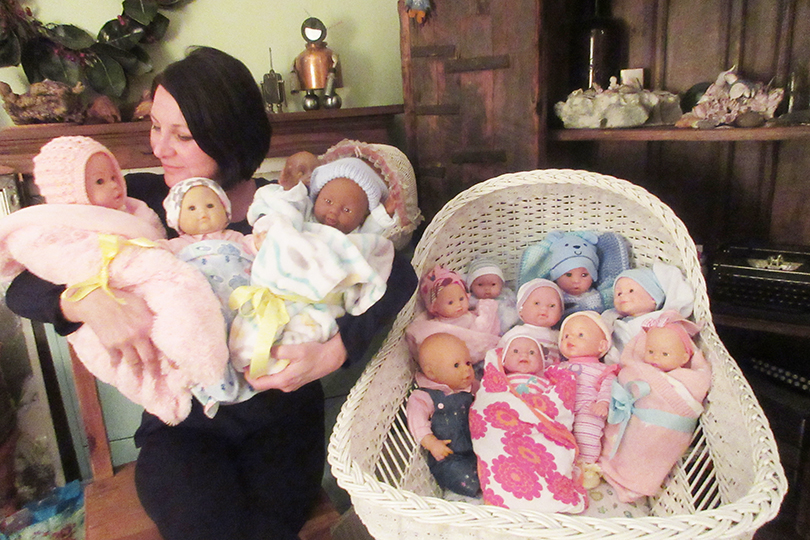 Jaime Lyn Brisebois with her family's vintage bassinet and some of the many dolls she has collected for distribution to patients with dementia through her Smiles for Alzheimer's campaign. Photo: Submitted.

A local resident is asking the community for donations of toy baby dolls, small blankets, and preemie sleepers as she preps them to pass on to those living with Alzheimer’s or any kind of dementia.

While Jaime Lyn Brisebois’ bassinet, a family heirloom over 60 years old, sparked the idea, doll therapy is known to help those with dementia to decrease stress and agitation.

Dolls tend to bring calmness, joy and smiles to them. And, the demand for them is huge, Brisebois said.

“I didn’t want to sell it (bassinet), or pass it on to someone else to use because of its age,” Brisebois said.

Through this project, which Brisebois calls Smiles for Alzheimer’s, she hopes to fill the bassinet with baby dolls, and gift them to those living in senior’s homes with dementia.

Her goal started off small, but later increased to 100 baby dolls, in honour of her friend who turned 100 years-old in February.

Brisebois has 22 dolls so far and her four-foot bassinet is already full, she said.

“I would love to have enough dolls to donate by the end of March. I think my husband would like to see the goal reached so that the dolls can be on their way out of our living room,” Brisebois said.

Brisebois asks people to send her new or nearly new baby dolls (with no hair), sleepers and blankets in excellent condition, baby doll hats, and preemie diapers. She hopes to make the babies look and feel real as possible.

“My family has taken an active role in this project. My husband helps pick up the dolls, my niece helps make the necklaces and my great nephew wraps the baby in a blanket and ties the ribbon around,” Brisebois said.

“We want to present each doll like a gift.”

Name beads are also welcome if individuals would like to dedicate a doll for a loved one.

Once she reaches 100 dolls, Brisebois will separate the dolls and pass them to different homes treating patients with dementia.

With doll therapy being used in some senior homes, Chester Village (3555 Danforth Avenue), Providence Villa have contacted her asking for dolls, Hellenic Home for the Aged (33 Winona Drive) has asked for 40 dolls, Brisebois said.

And, a home with the most generous space will have the bassinet and some babies, Brisebois said.

A few of the dolls she’s received are orders from Amazon, she said.

Now the group has volunteered to send her some knitted blankets and hats, she said.

And, this isn’t Brisebois’ first time helping those in need. She also volunteered in Romania at an orphanage.

People interested in donating dolls may send a doll directly to Brisebois’ home through Amazon or other sites of their choice.

People wishing to drop donations off are asked to please email Briseboise for her address at tartancactus@hotmail.com

She is also open to picking them up in the Greater Toronto Area.