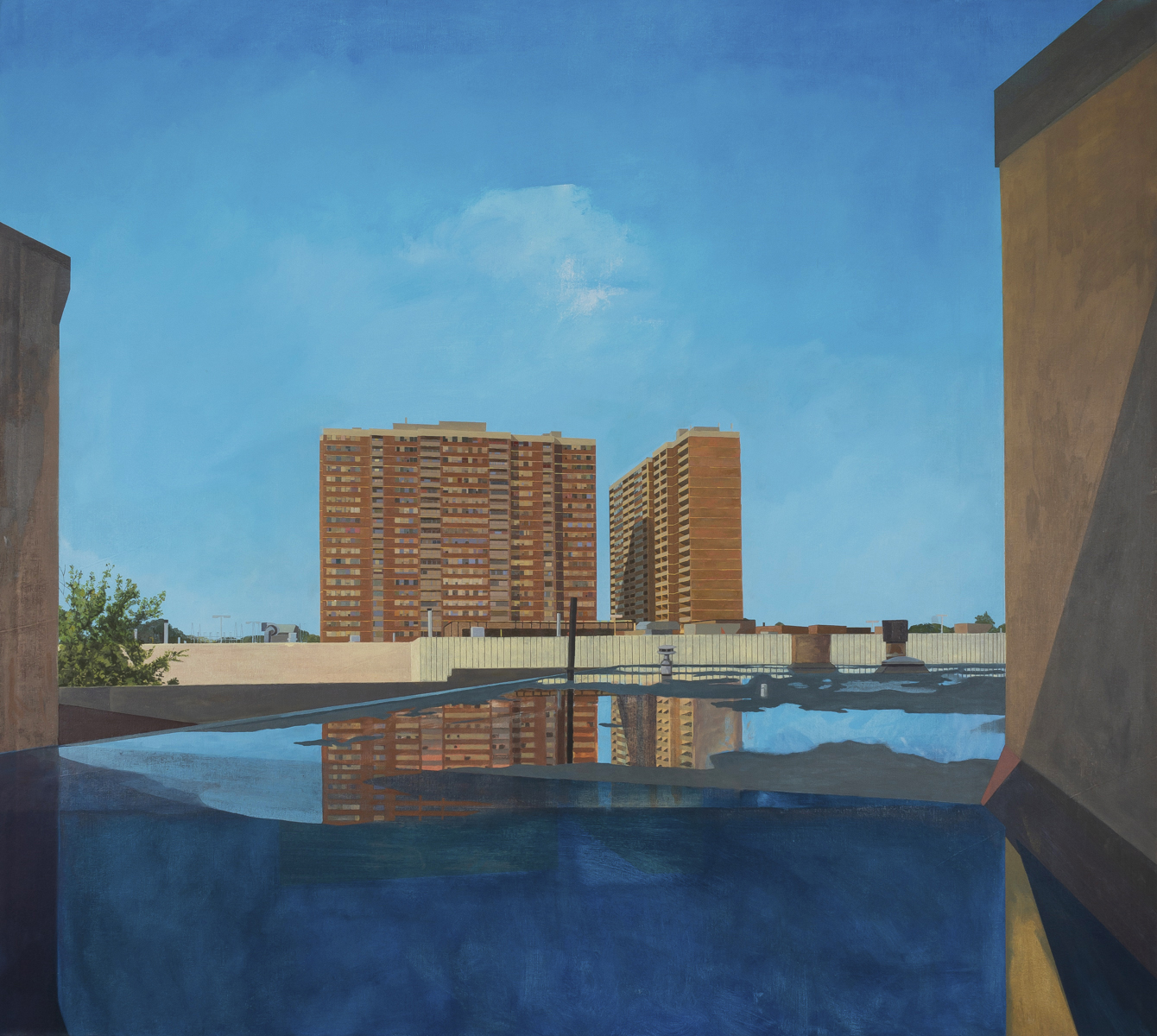 Artist Stefan Berg’s view of Main Square. His show Still Lives of Architecture is on until April 6 at the United Contemporary Gallery. His self portrait painting is shown in the insert.

A local artist is holding a solo exhibition featuring numerous popular Beaches areas and landscapes that he painted himself.

Stefan Berg, 33, has been painting for more than two decades using his love for nature and architecture.

Now, his art will be showcased for the community in his Still Lives of Architecture exhibition that opened March 2 and will run until April 6. The exhibit is on at United Contemporary located at 1444 Dupont St., and will be open from Thursday to Saturday, 12-6 p.m.

Growing up, Berg was surrounded by a variety of different art styles and techniques. His parents were both interior designers who attended the Ontario College of Art and Design (OCAD), and this developed his interest in buildings.

Berg also added that he had a learning disability which made it difficult to get through school. It took him longer than most people to read, and it affected the pace at which he absorbed information. However, it didn’t take long before Berg realized that he was stronger at learning visually. Soon enough, he spent most of his time drawing and admiring architectural photos.

“My parents always had a lot of art books and sketches around, so I was surrounded by it,” Berg said.
“But my father, particularly, would paint as a hobby. He would take me out painting in the fields at my family cottage, and it all began then.”

When it comes to his style of painting, Berg explained that his technique is quite different than most artists. Berg can spend from months up to years to complete one painting at a time.

This is because he prefers to reflect on a specific subject for long periods of time, recognize how it changes over the seasons, and add in the details he thinks is appropriate each time he comes back to it.

“For me, working directly in the scene or the subject, it becomes a very powerful connection,” he explained. “I feel most engaged when I put that time and experience onto the canvas.”

Some of the pieces he has created include scenes from Castle Park, The Royal Canadian Legion on Dawes Road, Trent Street, and more.

One of the more well-known paintings Berg has done is his art series called “Main Square”. It features the view from Berg’s studio window of an apartment complex built in 1972 that form the Main Square. He added that the way he represents light in each piece contributes to a sense of the scene.

When asked how he decides on what subject to paint, Berg stated that his inspirations are usually spontaneous. “I do a lot of walking in the neighbourhood and I almost exclusively will always draw or paint from life or a personal experience,” he said. “It’s often a sensation that I have when I’m moving through the space and something catches me.”

Berg also added that he feels his method of “painting from life” is the most direct and authentic.

“A lot of contemporary artists have been using photography or digital projection. It’s usually to speed up the process of the painting,” he said.

“For me, I actually want to prolong the process as much as possible. Welcoming time into the process is what really provides the perfect result.”

Those wanting to see Berg’s art in his Still Lives of Architecture exhibition can expect paintings that capture nature shifting in the city, the balance of light and shadows, structural renovations over time and authentic urbanization.

Berg will also be holding a second solo exhibition called Three Motifs that will run from April 6 to June 30 at the Montgomery’ Inn Museum in Etobicoke.

More on Berg and his art can be found on his website at www.stefanberg.ca