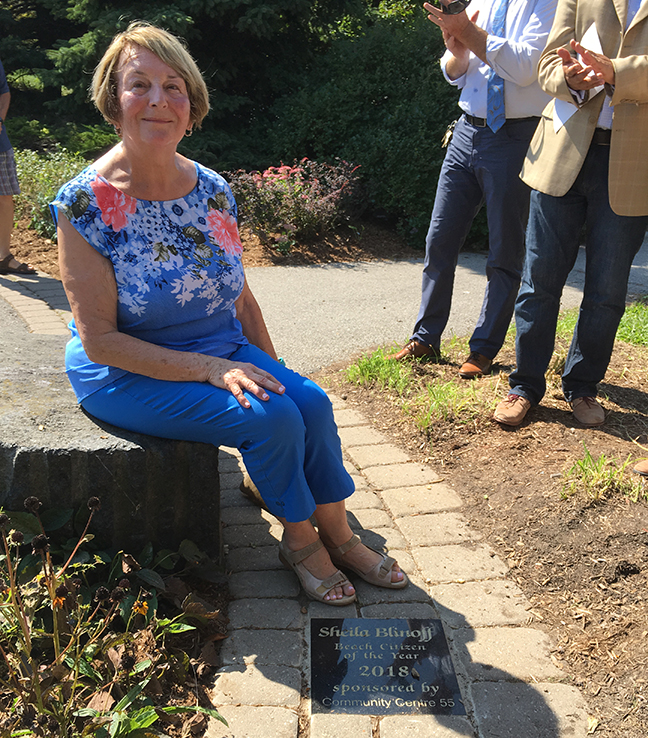 Sheila Blinoff, who was general manager of Beach Metro News for 40 years, is the 2018 Beach Citizen of the Year Award. In her column, she reminds residents that it is time to start thinking about who should be nominated for the 2019 Award.

Instead of wondering if this winter will ever end, you could be preparing to nominate  the next COY, or Beach Citizen of the Year.

The first COY, Gene Domagala, appeared in 2001 after Community Centre 55, the Beaches Lions, and Beach Metro Community News decided to recognize the great contribution of volunteers to this neighbourhood by honouring one “super volunteer” annually.

Suggestions were canvassed from the public, and the choice made by members of the founding groups. Nowadays selection is by a committee of former Citizens of the Year.

The judges look for candidates with a long history of volunteerism that has enriched local life. The nominees must live or work in the area and have completed most of their community service here. (The area is currently from Coxwell to Victoria Park, and from the lakefront to just north of The Danforth.)

The search for the next Citizen will begin in spring with ongoing reminders in this paper and elsewhere. Applications are also online at www.beachcitizenaward.org

The 2016 winner, John Ellis, recently revamped the application form and designed a new logo. Judging and checking information will be completed in  August. Traditionally the current COY notifies the new one.

On a weekend in September, the 2019 Citizen will be recognized  in a ceremony at the Millennium Garden at the south east corner of Coxwell and Eastern avenues. Each year the new inductee and previous COYs are led by a piper to the site, where all their well wishers are waiting. After speeches, and the presentation of certificates and good wishes from the mayor, local politicians and the prime minister, there is the unveiling of a black marble marker with gold lettering on the Walk of Fame, followed by refreshments and socializing as old acquaintances meet again.

Some past COYs  recently explained what the award has meant to them.

For Jason Bagopal (2017) it signifies that his efforts have not been in vain, and that others are aware and approve of his work. The recognition gives him more credibility when speaking to potential funders and service providers. They know he has the approval of a larger organization.

Carole Stimmell (2014) said she was happy and chuffed to be chosen. The award attests that volunteers are an important part of our community,  and accomplish amazing feats as individuals or groups. It draws attention to those who have made longterm commitments. The award made her more valuable and credible because when a Citizen of the Year supports a cause, others are impressed.

For Maria Perrotta (2004) the recognition drew attention to Pegasus, and brought more supporters to the group she founded.

Gene Domagala (2001) reiterated that when you help others, you know you are doing something worthwhile. He hopes the younger generation will emulate the Citizens and all volunteers.

I am the current Citizen of the Year, and I follow in the awesome footsteps of my amazing  predecessors.

Reading about their achievements is a reminder for all of us that the Beach would be a bleaker place without the institutions we take for granted and the volunteers who keep them alive.

2001 Gene Domagala:
I had the honour (with Carole Stimmell) of telling the first Citizen that he had been chosen, and for at least two minutes he was speechless – something never witnessed before or since. Gene Domagala is a tireless promoter of local history through his column in Beach Metro News and his historic neighbourhood walks.
He has been  at the forefront of the fight to save local landmarks including the Leuty Lifeguard Staton and the Silver Birch boathouse, and arranging for the city to erect signs outside significant locations (eg: the Southwood Drive home of the late Glenn Gould).  For over 60 years he has delivered Toronto Star Christmas boxes.

2002 Glenn Cochrane:
The late journalist and broadcaster was a spokesperson for many Beach causes and fundraisers.  With his wife Jean, he wrote The Beach: An Illustrated  History  from the Lake to Kingston Road. With his pal Gene Domagala, he helped save the Leuty Lifeguard Station and Silver Birch boathouse, and helped feed the homeless at the Beach Synagogue’s Interfaith lunches.

2003 Ted Randall:
Ted Randall ran the family business, Randall’s Stationery at 964 Kingston Rd., so knew everything that was happening in the area and where help was needed. As  a Beaches Lion  he was one of the main organizers of the annual Easter Parade, the sale of the Lions’ Christmas cakes,  and other Lions projects.

2004 Maria  Perrotta:
Maria Perrotta is the founder of Pegasus, and for many years was its administrator. Due to her efforts, there are now four East End branches of Pegasus providing a daily program for developmentally-challenged young adults, placement of some of them in a work environment, and a training  ground for young healthcare workers. She has been able to the enhance the lives of Pegasus clients and their families.

2005 Arie Nerman:
When the late Arie Nerman came from Winnipeg to Toronto, he revitalized the Beach Synagogue/Hebrew Institute and opened its doors at 109 Kenilworth Ave. to people of all faiths through tours, public meetings, historical talks, all candidates meetings, etc. During his years as president, he encouraged communication and friendship with other religious groups, and hosted a weekly Beach Interfaith Lunch for the homeless.

2006  David Breech:
David Breech has been president and coach of the East Toronto Baseball League, a member of the St. John’s Catholic Parents Council and the Kimberly School Council, a volunteer for the Spring Sprint, and the Down in the Beach Fun Run, and has helped run the  wine garden at the Beaches Jazz Festival. Those who are warmed with hot chocolate and cider at the annual Christmas in the Park concert, owe thanks to David Breech  and his Scouts.

2007 Mary Christie:
Mary Christie has served on the boards of Neighbourhood Link Support Services, the Parent Council at Adam Beck School, Michael Garron Hospital,  the City’s Parks and Recreation Advisory Council, and still found time to be the chair of Community Centre 55.

2008 Joan Brent:
Joan Brent was a member of the Volunteer Services at Michael Garron Hospital where one of her happiest tasks was wheeling new mothers and babies to the parking lot when they went home.
Her interest in families continued when she served on the board of the East York-East Toronto Family Resources Centre. She was a canvasser for Neighbourhood Link, the Cancer Society, and the Heart and Stroke Fund; an organizer for the Terry Fox Run on the boardwalk, and a drywaller at the Habitat for Humanity Build on Lutterell Avenue. As a Beaches Lion she organized the collection of thousands of old spectacles to be refurbished and sent to the Third World, and arranged for eye tests for impoverished children in this city. This earned her Helen Keller Award.

2009 Jean Cochrane:
Jean Cochrane served on the board of  Neighbourhood Link. She fundraised for the Toronto Public Library by selling its discarded books.
She helped save the Leuty Lifeguard Station. She served on the committee to save and restore Maple Cottage in Leslieville. She has been involved  with  preparing and serving Interfaith lunches at the Beach Synagogue, as well as co-authoring  with her late husband, Glenn, The Beach: An illustrated history from the Lake to Kingston Road. With Carole Stimmell,  she researched and edited two booklets on local men and women who served in the two world wars.
Her book on Kensington Market was nominated for a Heritage Toronto Book Award.

2010 Pat Silver:
Pat Silver is a founding member and performer in the Sphere Clown Band, which for over 30 years has toured the world and performed at  the White House, China, and of course the Beach. As well she finds time to volunteer with local and international organizations and causes.

2011 Anne Butler:
Actor Anne Butler used her professional skills to produce dramas
and raise funds in for Centre 55. Her annual Bard in the Park brought free Shakespeare plays to Kew Gardens and opportunities for aspiring young thespians to perform. For four years she appeared in a local version of A Christmas Carol raising money for Centre 55’s Share A Christmas.

2012 Thomas  Neal:
Thomas Neal is the driving force in preparing and tending the ice skating rink in the park at Glen Manor. He has been a board member at Centre 55, and The Friends of Maple Cottage, and was a founding member of the Balmy Beach Residents Association.  He is involved in sponsoring and coaching young players at Beach Community Soccer League, Ted Reeve Hockey Association, and Beaches Lacrosse. No one has ever seen him in  the same room as Santa Claus.

2013 Suzanne Beard:
The late Suzanne Beard spent many years of service to local Brownies and Guides, and to the Beaches Business Association. For almost a decade she helped organize Beach Interfaith Lunches.

2014 Carole Stimmell:
Preserving history is one of Carole Stimmell’s loves. She was active in rescuing and renovating two local landmarks, Maple Cottage and the Kew Beach Gardener’s Cottage. With Jean Cochrane, she had edited two booklets on local men and women who served in the two world wars.
She was vice president of the Toronto Historical Board. She  edited the Canadian Journal of Archeology, and the Ontario Archeology Society’s newsletter. Whenever there was a local dig at O’Sullivan’s Tavern, the Ashbridge House, etc., Carole would be there with her trowel. As the former editor of Beach Metro News, she helped many local groups thrive through her support and encouragement.

2015 Paul Babich:
A past president of the Balmy Beach Club, Paul Babich organizes and chaperones the Balmy Beach Old Boys’ Hockey Team tour and games in Europe every two years. He has served on the boards of Ted Reeve Arena and the Beach Metro News, where is presently a special advisor. For over 20 years he has been a BMN captain, dropping off papers to the carriers.
At the Shrove Tuesday and Christmas breakfasts at Community Centre 55, he is an accomplished pancake flipper, and a griller at the summer barbecue. He organizes fundraisers, including one to buy turkeys for the Share-A-Christmas program.

2016 John Ellis:
John Ellis, a member of the Beaches Triangle Residents Association, has been in the forefront of battles to preserve  and improve life in the Beach.  In the 1980s and ’90s he fought against violations by the Greenwood Racetrack. In more recent times he has been involved with setting urban guidelines for Queen Street development, promoting Heritage Conservation Districts, and the rejuvenation of the Beach and East Toronto Historical Society.

2017 Jason Balgopal:
Jason’s commitment began about 12 years ago when he became involved in Centre 55’s program to eradicate graffiti on the streets of our ward. Since then he has served as treasurer and chair of Centre 55, and on the boards of Beach Metro News and Youth Link. After his own experience with depression, Jason launched Beach Mental Wellness, a support group that now meets weekly.

Sheila Blinoff is the 2018 winner of the Beach Citizen of the Year Award. She served as general manager of the Beach Metro News for 40 years and is currently a special advisor on the BMN board.