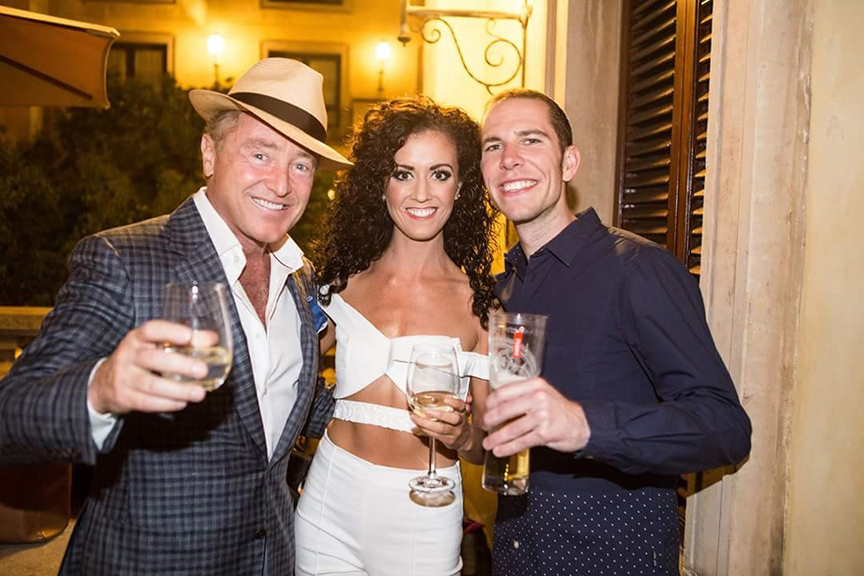 Ciaran, right, and Maeve, centre, with Michael Flatley of Lord of the Dance. The couple have opened the Plummer Donaghy Academy of Irish Dance in the Beach. Photo: Submitted.

Ciaran and Maeve have put down roots in Toronto after 14 years on the road with the world’s biggest selling dance show – Michael Flatley’s Lord of the Dance. Both dance instructors hope to carry forward their passion for Irish dancing and performing arts through their school, The Plummer Donaghy Academy of Irish Dance located near Kingston Road and Ridgemoor Avenue.

“My dad Ron Plummer was an Irish dance teacher who owned his own studio, so I grew up dancing for him. He was one of the most successful Irish dance teachers in North America with schools from Toronto to California and everywhere in between,” said Ciaran.

“Unfortunately, he passed in October 2017 and I hope to carry on his legacy and follow in his footsteps as we opened our own practice in September 2018.”

Ciaran has done his father proud winning several regional and national championships. He then won every major title Irish dancing has to offer including The Great Britain’s, British National’s and The All Ireland’s. In 2002 he won The Oireachtas Rince na Cruinne and became a world champion, defending all his titles the following year while winning his second consecutive world championship.

“In 2012 I co-founded a dance company called TapTronic, which is a progressive fusion of Irish dancing with electronic music, combining two art forms that had never been mixed; TapTronic’s videos now have hit millions of views on YouTube,” he said.

Shortly after graduating high school Ciaran joined Lord of the Dance and has since toured all over the world performing as the principal lead in the show, which coincidentally is where he met Maeve, who was chosen as a new cast member in 2003 as the lead role of Morrighan.

Maeve, who is from Belfast, started dancing at age seven, following in her sister’s footsteps.

“It was common as most kids danced or played soccer. When I was 16, fresh out of high school, I joined Lord of the Dance and toured with them for 14 years which was released as a 3D film in cinemas worldwide.”

Maeve also performed in Flatley’s Feet of Flames in Taiwan and Dangerous Games while being top four in her regional championship’s, placing in the All Irelands and World’s.

“We have lived in the Beach for about two years at Queen East and Woodbine and hope to spread our love for Irish dancing with all future generations.”

Located at 2351 Kingston Rd. and opened for just under a year, the academy offers classes to everyone on Wednesday evenings from 6:30 to 8 p.m.

The couple explained that “classes are tailored to fit the needs of each student, both recreationally or competitively, from a beginner all the way to the championship level. We’re also available for private classes, functions, and performances.”

The Plummer Donaghy Academy of Irish Dance aspires to provide a motivational atmosphere for students of all ages, offering two different styles of dance; hard shoe and soft shoe, each which are accompanied by their own unique time signature and skill set. Ciaran and Maeve aim to share their passion for dance while helping local residents build both their confidence and technique.