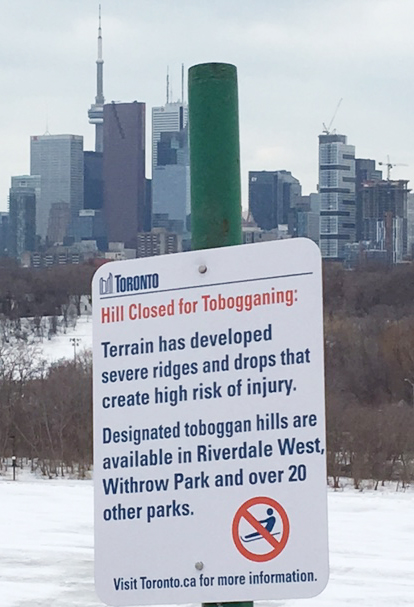 The City of Toronto put up signs earlier this winter announcing the closure of the Riverdale Park East toboggan hill due to safety concerns.

The Riverdale Park East hill has been shut down by the City of Toronto for the rest of the winter due to safety concerns.

The popular toboggan hill was officially fenced-off a little over three weeks ago as a result of its dangerous bumps and ridges. The hill was shut down by city staff after the park’s operations management deemed its condition to have deteriorated and become unsafe.

The city said that although the public toboggan hill provides a place for fun winter activities, the steep drop-offs due to the bumps and ridges are considered to be dangerous for tobogganers. This is due in particular to the several dangers located at the bottom of the slope.

A sign placed at the park reads, “Terrain has developed severe ridges and drops that create high risk of injury.”

Toronto-Danforth Councillor Paula Fletcher posted a media release on Jan. 25 on Twitter and Facebook addressed to the Parks Forestry and Recreation Director, Richard Ubbens, in a letter to re-open the hill. In the letter, Fletcher explained that the hill’s closing is disappointing to residents who come to the park during the winter season.

Fletcher also addressed other concerns such as issues with landfill, and garbage and construction debris underground causing the bumpy hill.

On Friday, Feb. 1, Fletcher held a meeting at the site with Solid Waste, Parks staff and the Director of the Parks to discuss the hill’s progress.

In a statement to Beach Metro News, she said, “They are committed to filling in any gaps in the hill and adding new soil. The ground has shifted considerably and there are large indents, which is why there are safety concerns. Staff are committed to repairing it.”

Please visit the Beach Metro News online at https://beachmetro.com for any updates on whether the hill will be re-opening this winter for tobogganers.