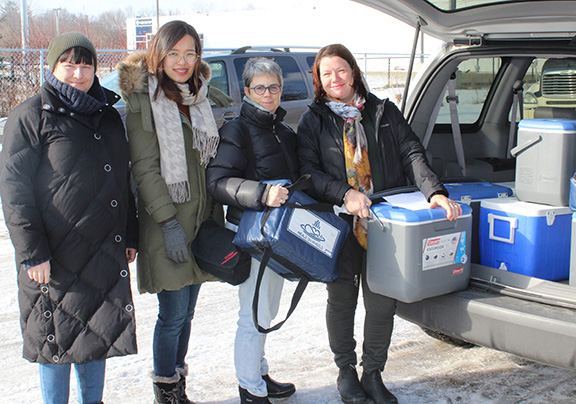 Beach volunteers Erin Boyd, right, and Donna Braybrook, second from right, load up in preparation for delivering Meals on Wheels for The Neighbourhood Group recently. Helping them get the delivery sorted are Meals on Wheels staffers Anna Klukowicz and Shumei Liang. Photo by Alan Shackleton.

There are a lot of community groups working busily in the Beach. They are supported in part by the time and talents of a lot of volunteers, and among them are several that are home grown, started by locals who saw a need and reached out to their neighbours to help meet it.

For instance, there is the Interfaith Lunch Program which has been running for 20 years. From October to May its volunteers provide lunch for 25 to 50 or more people, on a weekday rotation through six places of worship, Corpus Christie Roman Catholic Church, Beach United, Kingston Road United, the Beach Hebrew Institute, and St. Aidan’s and St. Nicholas Anglican churches. It operates without a formal board, but with occasional meetings of a watchdog group of volunteers representing each host.

Kim Van Rooy, organizer at the Beach Hebrew Institute, the smallest venue, says what they offer is not only a free lunch, “It’s also a fellowship, a place to meet for people who live on their own. It’s a way for them to feel connected.”

As she describes it, the food delivery is a model for preventing food waste and keeping costs down. The neighbourhood’s ubiquitous volunteer, Gene Domagala, picks up supplies from the Daily Bread Food Bank, the Grace Pascal Food Bank and from local donors. He takes them to Corpus Christie where other volunteers sort and deliver them for the participants, and if there is anything left over it goes to the food bank at Calvary Baptist Church on Main Street.

Each host provides the free site and a limited annual allowance to pay for supplies which Kim and her counterparts use to buy fresh fruits and salad makings, juice or cheese.

As well, the volunteer cooks may add some flourishes to the food bank soups and casseroles, and occasionally make their own, as when the churches which provide Christmas dinners make turkey soup afterward. Volunteers sometimes donate homemade supplies or tasty touches such as dessert or a box of cookies.

They also serve the lunches and clean up afterward. Then, if there is anything left over at closing time, the clients are welcome to take it with them.

One thing these Beach-born organizations have in common is their differences. Among them they address a range of needs and interests.

Pegasus Community Project works with and for adults with developmental disabilities. It was formed because, as Executive Director Paula Murphy puts it, “They are people who, at age 21 fall into an abyss of no-things, a withdrawal of support that affects families and can leave the individual lonely, with a loss of community contact and a possible loss of both social and academic skills.”

Pegasus was founded in 1994 by a small group of parents and professionals led by Marie Perrotta, to remedy that lack of support, and is overseen by a seven-member volunteer committee.

About 45 adult participants take part in small, community based programs run by professionals and volunteers in four venues in the area. They offer fitness, life skills, a chance to explore arts, to explore some areas of the city, to have access to technology and possibly to be employed or themselves volunteer.

For instance, some participants work with staff in the fundraising for the Thrift Shop operated by Pegasus at 931 Kingston Rd., and some help to organize their annual picnic.

In October there is a Pegasus Inspirational Film Festival (PIFF) that calls for a number of skills. “It’s a way to showcase the talents of the people we support”, says Paula.

“The participants do five minute films, working with special software. They act, create posters, props, everything. They partner with film students who get something on their resumes. It’s a good partnership.”

Pegasus is in numbers a small organization. It has a small staff and roughly 40 volunteers whose praises are sung by Paula. “Volunteers are absolutely vital to our operation. We can’t put a value on their work, their contribution is just invaluable.”

Friends of Glen Stewart Ravine doesn’t have a board of directors and only musters its dozens of hard working volunteers twice a year. What it does have is a motto “Stewardship, Conservancy, Appreciation”, and a handful of people who use the internet to show and tell information about the ravine.

Katya Nosko says the Friends started in 2013 when she and another ravine walker felt the ravine was under stress.

She felt that Beachers didn’t know about this very special asset in the neighbourhood or, if they did, didn’t know how to treat it respectfully.

“This neighbourhood wasn’t taking care.” She wanted to alert people to its value and enlist them to help protect it. “There was nothing in the neighbourhood to encourage conservation, how to use the ravine. Ronn Stevenson and I put together a web page, and started chatting it up and even accosting people we met in the ravine.”

The first 4.5 hectares of Glen Stewart was donated to the city by A.E. Ames in 1931, and added to later by the city. It is home to some rare native species including red maple and red oak trees, a threatened variety. It also has valuable ecological functions including providing shelter and food for birds and wildlife.

It was designated environmentally significant by the Toronto Regional Conservation Authority in 1982, and again by the city in 2007. In 2008, the city developed its ongoing Glen Stewart Ravine Management Plan, which has included building the staircases at Beech and Balsam, clearing invasive species, adding and nurturing native plants and trees.

Katya says city staff are necessarily strict about what the Friends may do in the ravine. They have set up links with the city, the schools, the YMCA, and invite experts to lead nature walks, and teachers to take children on supervised information and craft outings. And as they work to encourage people to enjoy the ravine, they also urge visitors to treat it respectfully, by, for instance, staying on the path because climbing the slopes or walking the banks of the stream can do serious damage to its terrain, its plants and its creatures.

They were also a vigorous voice in the campaign to prevent the building of a condo at Beech and Kingston Road and are still keeping a watchful eye out.

And twice a year, spring and fall, they muster those dozens of volunteers and arm them with bags and rakes to give the hidden treasure a careful, coordinated clean up.
Katya says the Friends’ efforts are paying off. “It has taken on a life of its own. The area really loves its ravine.”

Community Centre 55 is an agency of the city started in 1975 with a goal of bringing people together, by providing a community meeting space and a wide range of programs and events. The Centre, unique to the Beach, operates out of the former Police Station 55 on Main Street, with a volunteer management committee and a small staff headed by executive director Debbie Visconti.

It runs several licensed children’s programs in local schools and on the premises, seniors’ activities, a few of which have small fees attached, and offers space in the building for other community groups for little or no charge.

But what most Beachers know the Centre for is their presentation of one volunteer-fueled community event after another. Not all, but some of them raise funds and awareness for others.

For example, the Tannenbaum 10K race on the Boardwalk in December is manned by volunteers and staff, and attracts about 1,500 runners who pay an entrance fee that helps the Centre buy supplies for its Share Christmas campaign.

Its annual Hamper’s Santa Claus parade kicks off Share a Christmas, its biggest single project and Debbie says, “the community is really on board. For four or five days 500 volunteers collect, sort, pack and deliver food and toy donations to 700 families across the community.”

It is one of the projects that gives local students a chance to earn some of their required volunteer hours.

The Centre is, of course, a busy place all year round. For instance, they offer seniors a choice of clubs, a coffee club, a club for knitters, for travelers and, in the spring and autumn, for walkers, plus fitness and yoga sessions that do come with a small fee. In January there is a Winter Festival, where senior volunteers provide a fund raising bake sale.

Then there is that schedule of colourful, slightly off beat events, all involving volunteer effort. They include Bard in the Park, a car show and shine, breakfast with the Easter Bunny, Seniors Games Club, Slobberfest for dog lovers, Family Fun Night, a Spring Fling for the children and children’s programs, and more.

“After all,” says Visconti, “our mandate is to help the community and bring people together.”

One of these agencies that began as a few people with a local idea has grown into a large, complex entity.

In 1975, local citizens came together because they were concerned about the welfare of seniors in the Beach neighbourhood. They established Senior Link. Over the years it offered services to a broader group of people and became Neighbourhood Link Support Services. Then, in 2017, it joined forces with the venerable Central Neighbourhood House and became The Neighbourhood Group.

It has government and United Way support and a fundraising Foundation providing backing for many of its programs, but has not lost its personal, neighbourhood focus, much of it delivered by its hundreds of volunteers.

It is still governed by a volunteer board, and now claims more than 1,200 volunteers who provide more than 30,000 hours of help in a highly varied number of ways.

One of the Group’s oldest programs is friendly visiting to isolated seniors. Lorie Fairburn, the Group’s development and marketing manager says it’s a program that has fostered many friendships, and one that can always use more volunteers.

Volunteers also deliver Meals on Wheels, they escort seniors to medical appointments, and work with the Adult Day Programs for stroke survivors, frail seniors and people with Alzheimer’s.

The Neighborhood Group also welcomes volunteers who are good at helping with cleaning, painting or gardening at their supportive housing buildings or preparing and serving their community dinners.

Their volunteer activity runs to computer support for their employment resource centre, which helps people looking for work. They have computer tutors teaching basic skills, and in March and April an income tax clinic for low income people, run by qualified volunteers.

They also work with vulnerable young people in camps and drop in centres, and provide tutoring and leadership training.

And The Neighborhood Group volunteers connect with immigrants, helping them learn English and computer skills, and offering yoga classes for newcomer women’s groups which provide social contact as well as exercise. They also hold Conversation Circles, usually mixing people from a variety of backgrounds, to help with everyday language skills and how to navigate ordinary activities such as supermarket shopping and using the TTC.

The organization’s Board Chair Mary Christie made volunteering her message in their recent annual report, and might have been speaking for all community groups. “You can make a difference in people’s lives, which in turn enhances our community and indeed our society as a whole ….there are so many ways you can help, and so many organizations that need that help.”