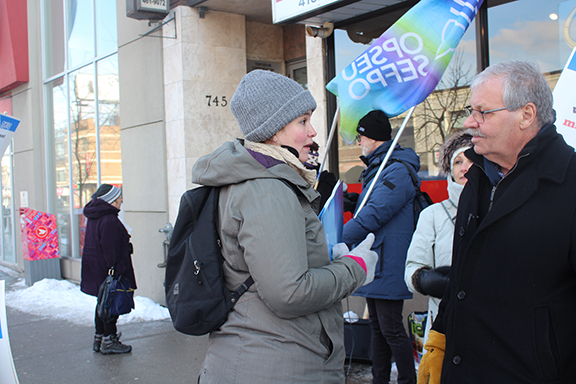 Elizabeth Wickwire, an English instructor at Newcomer Women's Services Toronto on Danforth Avenue, speaks with OPSEU President Warren (Smokey) Thomas during a protest outside the offices earlier this week. Photo by Rushanthi Kesunathan

Employees at Newcomer Women’s Services Toronto (NEW) and members of the Ontario Public Service Employees Union (OPSEU) gathered in protest on the afternoon of Feb. 19 in the Danforth and Pape avenues area to demand an end to more what they said was more than decade of stagnant wages.

They were joined at the protest by OPSEU President Warren (Smokey) Thomas.

“They’ve taken 10 years of no improvements whatsoever and if you go 10 years with no increase and think about the cost of living, your standard of living is going way down,” Thomas said. “I find it hard to imagine that the employer couldn’t find it somewhere in their budget for a wage increase to these employees who are not overpaid.”

Employees want to bring the employer back to the table with a fair wage offer, Thomas said.

Made up of 20 employees and a number of casual staff, NEW’s all-female staff have been helping immigrant women for the past 30 years, providing a range of free services such as employment and settlement services, skills development, and language training.

In 2017, workers joined OPSEU in order to bargain a decent wage increase. Two years in, they are still trying to bargain their first contract.

Elizabeth Wickwire is an English instructor at NEW.

Back in December, NEW offered a 1.4 per cent increase over a two-year period, which employees have refused to accepted, Wickwire said, calling it an ‘unfair wage increase.’

“It’s nothing if you look at the rate of inflation in the past decade. We’re getting poorer and poorer every year,” Wickwire said.

Judy Fantham is the executive director at NEW. She said the board continues to engage in a collaborative and respectful bargaining process with OPSEU, as both sides work towards the first collective agreement.

“While we would like to keep bargaining to the bargaining table, I can tell you that last week the Employer invited the Union to reconvene conciliation as soon as possible,” Fantham said.

“The Union has suggested mid-March as a conciliation date and we look forward to a positive outcome,” she said.

Employees have voted to go on strike if necessary.