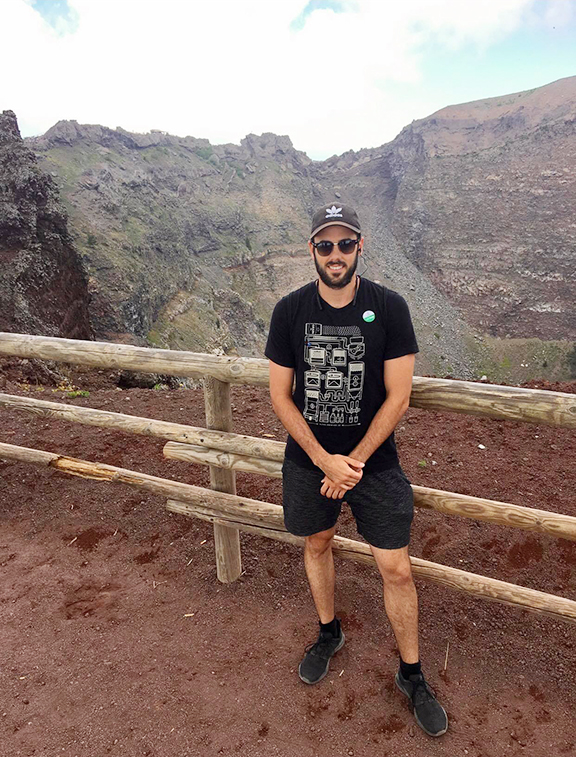 Liam DeBoer, 24, trained for hours every day so he could take part in the Oak Island Marathon in North Carolina on Feb. 16. He took part in the run to raise money and awareness for Mario Diotte, a friend diagnosed with a rare form of liver cancer. Photo: Submitted.

Liam DeBoer never thought he’d be leaving his home in East York to run a marathon in North Carolina this month. He also never thought he could raise almost $45,000 in three months. But after the 24-year-old learned his boss turned best friend developed a rare liver cancer, DeBoer didn’t need to think about how to help.

“I wanted to put myself on the line for him.” he said.

In September 2018, Mario Diotte, found out he had fibrolamellar-carcinoma – it’s so rare his only hope was to try an experimental treatment south of the border in New York. Patients like 28-year-old Diotte, who can’t have his tumor removed, normally don’t live past one year after their diagnosis.

“He had to quit work and everything was up in the air as to whether he was going to get funding [from OHIP],” DeBoer said.

With that in mind, DeBoer and Rob Ratz, a fellow co-worker at the La Carnita bar downtown, decided to help raise money for Diotte’s monthly visits to New York.

First, they thought of raising awareness with the marathon. Then, they launched a GoFundMe page with a $10,000 goal – they hit this mark within two weeks.

OHIP covered Diotte’s first meeting in New York which cost $5,000, but when he brought his treatment back home, he learned he wouldn’t be getting any more help from OHIP.

“My treatment isn’t funded because it’s an experimental trial and Ontario won’t cover anything outside of the province that is experimental,” Diotte said.

He said the price tag on his first round of treatment, six months worth of pills and visits to the Memorial Sloan Kettering Cancer Center, is about $120,000.

“Canadians talk about how amazing our healthcare is and I’m not putting it down, but there’s room for improvement,” said DeBoers who thinks OHIP should cover the treatment as it’s shown positive effects on other patients.

But Diotte said his friend didn’t stop there.

“For his birthday, he asked his family not to give him anything and to donate to my cause,” he said, which even prompted DeBoer’s little cousin to hand over a jar full of spare change.

“He shrugs it off like it isn’t a big deal, but he got the ball rolling, he made it all happen and I don’t know if he realizes the impact he’s made.”

Although Diotte has collected just enough money to cover his first round, in late January he learned his tumor grew by 20 per cent in the last two months. He says it means more treatment and more money.

Despite the circumstances, DeBoer said Diotte’s optimism inspires him to keep fundraising.

DeBoer took part in the Run Oak Island marathon in North Carolina on Feb. 16 to help raise funds for Diotte.

Other plans include more initiatives around East York and creating a menu item at La Carnita which would see some proceeds go towards Diotte’s treatment.