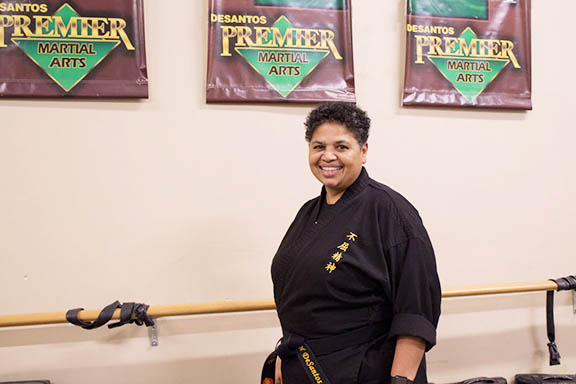 Veronica DeSantos at the DeSantos Premier Martial Arts studio which is celebrating its 30th anniversary in the community this year. Photo by Kasy Pertab.

The DeSantos Premier Martial Arts studio is celebrating 30 years of bringing Tae Kwan Do and Karate to the Beach area.

With two locations – one at 210 Main St., and the other at 603 Gerrard St. – the studio offers a variety of traditional martial arts styles to the community.

Veronica DeSantos is the lead instructor and owner of the studio. She explained that her motivation to teach others stems from her own passion for martial arts.

“I started martial arts because I wanted to defend myself,” DeSantos said. “I wanted to know I had a right as a woman to walk anywhere and be safe, and that made me want to teach others the same thing.”

DeSantos was born in Prospect, East Bank Demerara, Guyana, and migrated to Canada when she was 16-years-old. Even as a teenager, she had an extensive love for martial arts.

Shortly after achieving her black belt, DeSantos competed in several tournaments across North America. In 1988, she travelled to Boston where she competed in a tournament and won a prize of $5,000. With this money, DeSantos opened her own martial arts studio a month later and they are now celebrating 30 years of operation.

DeSantos also travelled across the world for competitions in places like Russia, Germany, England, Serbia, and Italy. She was ranked Canada’s Number One best female fighter from 1982 to 1990, and was inducted into the Canadian Black Belt Hall of Fame in 2016.

The DeSantos Premier Martial Arts features the style of Tae Kwan Do, with a mix of other martial arts that the instructor has learned from her travelling over the years. Here, a variety of skills are taught including form, sparring, self-defence, character building and discipline.

The age range for classes start from three years and up. There are programs for Tiny Champs (ages 3-4), Little Champs (ages 5-7), Youth Classes (ages 8-12) and Teen and Adult Classes (13 years and up). Students wanting to train can also choose from beginner, intermediate and advanced classes.

Every student who joins the studio will first attend a one-on-one discussion before they begin their training.

“When you come in, we sit down together and we set a goal,” DeSantos added. “It’s up to you to reach that goal, but we help you every step of the way.”

For those wanting to learn the skills of martial arts, DeSantos explained that she wants others to benefit from what she has learned as well.

“I learned both physical confidence and emotional confidence,” she said. “To have those two skills, you can stand up to anything or anyone. You gain discipline in your life and discipline for yourself.”

After the success of growing her martial arts studio over the years, DeSantos wanted to give back as a sign of her appreciation. Seven years ago, she started up a non-profit organization called the DeSantos Foundation and began fundraising with an annual walk.

The fundraiser consists of a one-day Friendship Walk on April 13 from the De Santos studio on Main Street to the studio on Gerrard Street East; or of a four-day walk that goes from Toronto to Niagara Falls.

Participants can register, donate or volunteer to help raise funds for either walk.

The Friendship Walk is five-kilometres. The walk from Toronto to Niagara Falls takes place in four one-day portions from April 23 to 26 and is about 145 kilometres in total. Participants can choose to walk for one day, all four days or any combination of days.

DeSantos said funds from the walks go to a variety of causes which include school breakfast programs both locally and internationally, and support for the Red Door Family Shelter. Funds have also helped to provide shoes, school uniforms and scholarships for children in Guyana and in the Philippines.

She said that she chose the walks as the organization’s fundraising events to make it easier for everyone in the community to be involved.

“I wanted to have something more substantial so that anybody of any ability or capability could do and be a part of,” she said.