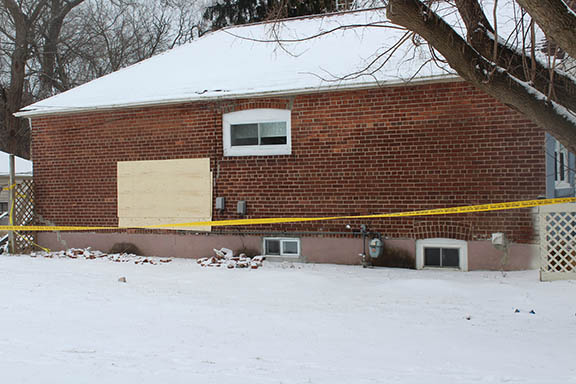 Plywood covers the damage where a front-end loader hit a house on Macey Avenue last weekend. The driver of the loader has been charged with theft of a vehicle and impaired driving.

A 27-year-old man is facing a number of charges after an allegedly stolen front-end loader crashed into the side of a house in the Danforth and Victoria Park avenues area recently.

According to police at 55 Division, the front-end loader was allegedly taken from a driveway in the area on Saturday, Feb. 9 at approximately 1 p.m. and driven away.

At some point, the man driving the loader took it down a hill on the east side of Macey Avenue, just north of Danforth and lost control.

The loader then smashed into the north wall of a house located at 9 Macey Ave.

A person was reportedly in the home at the time, but no one in the house was injured.

The driver of the loader suffered a minor head injury as a result of the crash.

Police said the man has been charged with impaired driving, theft of a vehicle and dangerous operation.

Police said one other person is still being sought in connection with the investigation into the incident.