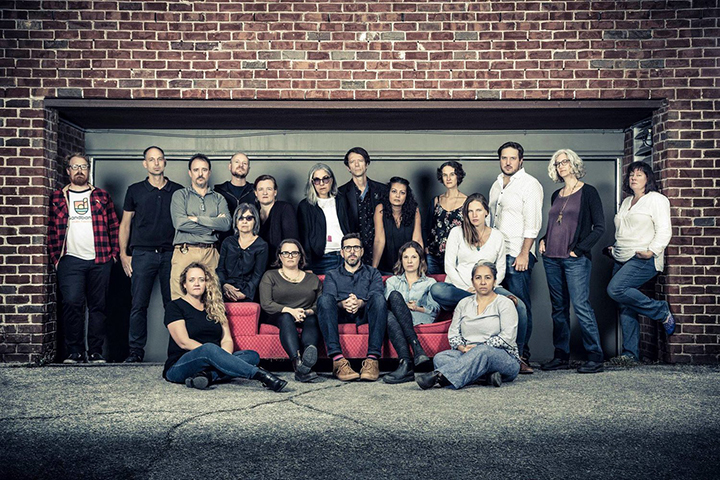 James and Mary Boyd of the Mamals talked about the band recently with Beach Metro News. Photo by Heather Pollock.

Local indie band the Mamals, which has its roots among residents of The Pocket neighbourhood in the Jones Avenue and Gerrard Street area, released its self-titled EP on Jan. 25.

The Mamals were started in a basement by husband and wife James and Mary Boyd when the duo started writing songs together. Mary wrote the lyrics and James the music with the help of Clay Place Jones (Huddle).

The Beach Metro News recently chatted with the duo:

1. Tell us about yourselves. (Where are you from, what do you do, what kind of musical background do you have?)
James has been in bands on and off since his teens and in recent years has been composing music for TV/commercials/film. He can play a variety of instruments really well (guitar, bass, piano, French horn), and is happy to learn new ones to make the music work. I believe some of the trumpet sounds on our EP came from him seeing a need for that sound, renting a trumpet and teaching himself how to play it well enough for that song!
Clay Place Jones was a member of a great band called Huddle. We were fans of the album, were lucky enough that our paths crossed and he came on board playing some of the guitars, bass and helping mastermind the musical arrangements on the EP.
I (Mary) have no musical background at all, aside from a general love of singing and loving listening to music.

3. What were you doing on the day you decided to write music? What sparked the idea?
Well James is constantly writing new music, just for the love of creation. This Mamals EP came about because while James has an unending supply of musical ideas, he finds it tough to come up with lyrics.
Eighteen months ago I had some back issues that made me unable to do much except lay down with a laptop. James asked me if I’d like to write some lyrics for him, and it became an outlet/distraction for me; a way to escape thinking about all the other things I was unable to do at that time. Out of that, came the songs on this EP.

4. What genre of music do you consider your songs to be?
That’s a tough one as I am not sure we fit into a box like that. Brimley Bay is pretty low key, maybe even slightly country. Songbird and Wreckage are kind of melancholy Indie. Buckle Up is much more upbeat and poppy.

5. What are the main themes or topics for most of your songs?
They all pull from life experience; they are all “true stories” in some way. Wreckage is about struggling in life, just trying to cope. Songbird is about the need in a relationship to make time for each other, together, away from the craziness of the everyday. Brimley Bay is about my hometown. Buckle Up is about the days of our youth, at university, going to bars and life getting crazy.

6. Who are your major influences?
Well. I am not sure about influences, but some of the artists that inspire us, both musically and lyrically are Elbow, Foy Vance and Pantera.

7. What prompted you to bring in the neighbourhood choir? (What kind of instruments do they play?)
James and I had written these songs for the fun of it, without knowing where we were going with it.
When we had finished, we knew they were good, but weren’t sure what to do with them. For a while before that we had been getting together with some friends once a month to play guitar and sing cover songs together, potluck style, with all our kids running around. People told us they loved being able to come and sing as a group and we realized that this was a great way to build community and make stronger connections with people.
So we had the idea to combine the two things and we extended the invitation to come sing some original songs to our friends and neighbours, who extended the invitation to some of their friends and neighbours. From that, grew the choir of 20 people.
We were really excited about being able to share this journey with people who wouldn’t normally be involved with music. The idea was to create a deep and long lasting creative experience for people to take part in regardless of their level of previous experience.
Many of our members can play instruments, although most of them were involved just in the choir for this EP. Our lovely neighbour, Lise Lotter, plays cello on two of the songs.

8. What are you working on right now?
We are looking at what the future holds, hoping to write a second release and taking the music from the studio to live audiences.

9. What does the future look like?
Our hope is that the group continues to grow and that we can make some more great music whilst at the same time allowing Mamals members to enjoy this creative outlet.

10. What advice would you give to aspiring musicians?
I would say – follow your dreams and don’t let your nerves get in the way.
Many of us stop ourselves doing things out of worry about how it will turn out, but we rob ourselves of so many rich life experiences that way. Don’t stop yourself from doing something for fear that you won’t be good enough.
To get good at something you have to try and try, and learn and grow. And sometimes you start with one thing and it leads in a whole other, wonderful direction, like Mamals did!
James has taught me that about the creative process: you have to write a ton of sub-par songs before you get to create the real gems. And doing something just because you enjoy it is sometimes enough; you don’t necessarily need an endgame in mind.

People can check out the Mamals’ music at www.mamals.band