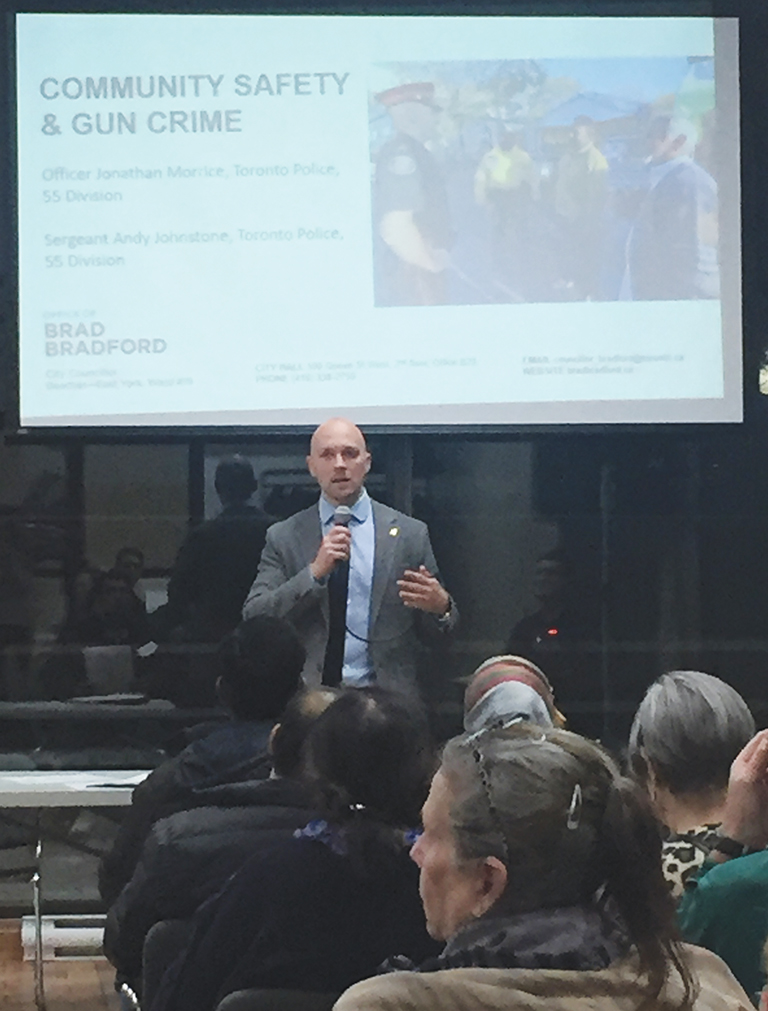 The top issues for the more than three dozen residents in attendance at the Jan. 22 meeting, were the sudden collapse of the Crescent Town bridge in November and the recent spate of gun violence in the Beaches—East York area.

Residents wanted to know who was responsible for the collapse of the bridge, which is located above Massey Square and connects apartment buildings in the area to the Crescent Town Elementary School property, and what the city is doing to prevent similar incidences from recurring.

Chief Building Official and Executive Director, Will Johnston said that an audit had been done on the collapse of the bridge, but that the results of the audit were not yet available.

He added that Pinedale Properties owns the portion of the bridge that had collapsed, but since the bridge had already collapsed, it was difficult to assess what caused the bridge to crumble on the early hours of Saturday, Nov. 17.

Johnston said there are laws in place under the Provincial Building Code Act to ensure that construction of bridges adhere to building code regulations in the Act. Johnston also pointed out that there are no laws or bylaws in the Building Code Act that require property managers to carry out regular inspections of privately-owned public structures such as the Crescent Town bridge.

“I’d like to see regular assessments by structural engineers, but we’re not there yet,” he said.

Beaches—East York Toronto District School Board Trustee Michelle Aarts told the meeting that the TDSB, who owns a portion of the bridge, attempted to repair their portion of it. They, however, could not proceed without a joint effort from Pinedale Properties to repair their side, she said.

Residents continued to press for answers before former Beaches—East York councillor, Janet Davis, asked Johnston about a motion from council that called for an inquiry into the collapse.

Davis asked Johnstone, “What are you doing to compel Pinedale Properties to provide info on the inquiry?”

Johnstone responded that there was a motion from Toronto Council in December to have a meeting with the executive committee to discuss the audit results and recommendations on Jan. 23. However, due to the complexity of that audit and the number of city departments involved in it, the report to the executive committee is not anticipated to be ready until April or May.

Also in attendance at the Jan. 22 community meeting hosted by Bradford was Const. Jonathan Morrice from Toronto police’s 55 Division. He spoke to residents about community safety and what police are doing to combat gun violence in the city — particularly in the wake of the daylight shooting that occurred at Kingston Road and Woodbine Avenue on the afternoon of Sunday, Jan. 6.

Morrice explained that the shooting was a result of gang members targeting each other and a daylight gang-related shooting in the Beach area is “not typical”.

Morrice thanked the community who witnessed the crime for their quick response and said that their tips and calls led to two arrests within minutes. There is still one outstanding suspect in the shooting, he said.

Regarding the plan to tackle gun violence, Morris quoted Toronto Police Chief Mark Saunders who said that we “can’t arrest our way out of this.”

Morrice said that Toronto police are engaging with the community and the government to put programs in place to steer youth in the right direction before they turn to violence.

“A five-year-old doesn’t talk about wanting to have a gun in his hand,” he said.

“We want them to take the hockey stick and not the gun,” Morrice continued.

One resident stated that he was not satisfied with the “nice soft plan” in place to prevent gun violence and called for a handgun ban, which drew applause from the crowd.

Bradford reminded residents that since this is a federal election year, this is the time to be loud about gun violence.

Another resident echoed Morrice’s statement, saying that the programs need to be in place to “steer their moral compass in the early years.”

Aarts also highlighted that youth programs such as the Focus on Youth after school program has been cut and the summer jobs student employment program is on hold.

She encouraged residents to write to the provincial government to protest the cuts.

On a brighter note, Program Coordinator Adom Acheampong for East End Arts, called for youth aged 14-29 to get involved in a free arts program called the Crescent Town Youth Arts Project. East End Arts’ is a partially funded government program whose mandate is to enhance the communities in the east end by engaging youth and community partners in arts programs. Interested youth looking to participate can visit eastendarts.ca for more info.

He announced that the city has invested $162 million investment into accelerating the relief line construction by two to three years. A map of the new relief line can be viewed online at reliefline.ca.

Bradford’s next community meeting is scheduled for March 5, with the location to be announced.