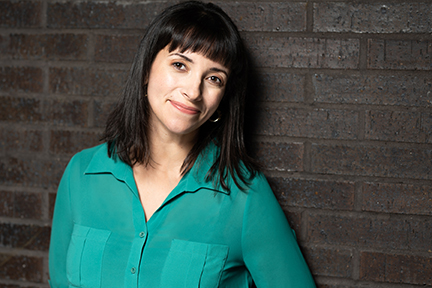 Monica Esteves, managing director at Crow's Theatre in Leslieville, will be heading to her new role of executive director at Canadian Stage in March.

Since 2010 Monica Esteves has been the managing director at Crow’s Theatre in Leslieville, sparking a creative neighbourhood playhouse for high quality, world class theatre in the east end community.

Cultivating physical spaces for culture is important to Crow’s, as families in the community have been responsive after three rounds of consultations throughout the last eight years.

After over a decade living in the Beach, Esteves has enhanced and elevated the experience of preforming arts in the east end of Toronto.

“My first years working were actually at the Canadian Stage, where I began to work on the management side of theatre, eventually I moved towards producing within the company. In 2004 I left to work with Canada’s National Women’s Theatre, moving to Prose theatre five years after—it’s been busy and I’m excited to go back to an organization that has been so formative to my career” she explained.

Esteves is eager to take on larger work at the Canadian Stage, located on Berkeley and Front; “the last two years have been so financially and artistically successful at Crow’s with respect to growth of audience, and development of response— I’m leaving the theatre in good hands.”

There’s not many preforming arts facilities east of the Don Valley, which has 1.3 million people in a rapidly transforming neighbourhood with solid cultural infrastructure; Crow’s has been a neighbourhood staple for decades being founded in 1983.

After embarking on a seven-year project Esteves said “with 12 million dollars in funding that our non-for-profit theatre has privately raised, we have worked with architects, developers and partners to build this stunning facility.”

With 15-17 productions going on each season, Crow’s has a multi-configurational, flexible 200-seat theatre, and a 90-seat studio for small performances. In addition there’s a 200-seat restaurant that operators can lease out; it’s clear that there aren’t many theatres with such opportunity for originality.

Approaching their two-year anniversary of renovation completion, Crow’s has also decided to rent out their venue spaces for events such as weddings, farmers’ markets, office holiday parties, and many other celebrations.

“Due to the technical capacity of the theatre we are in high demand for corporate events; not many spaces can compete with our costs of technical inventory” Esteves said.

Kids programming is also available at the theatre; from dramatic arts classes, March break camp, Sunday afternoon family concerts, to ‘Banter for Babies’ in their restaurant. Esteves said that “we learned our local area has the most households with children under the age of six in all of Toronto. That’s a lot of families who need a physical space for culture.”

Located at 345 Carlaw Ave., Crow’s has built a large audience through traction and awareness—any time of year there are at least two shows to choose from at the theatre.

Over the next month audiences see productions such as Tartuffe, Grace, The Wedding Party, Old Man River, and Mary’s Wedding; listings can also be found on the Crow’s Theatre website at www.crowstheatre.com