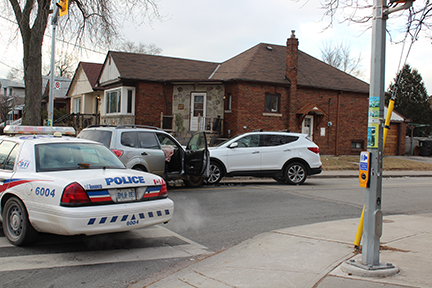 Police investigate a collision at Coxwell and Plains Monday morning. Two men fled the scene. One is in custody and police are searching for the second man. Photo by Alan Shackleton.

Toronto police are searching for a man they consider to be violent and dangerous after he fled the scene of a car accident this morning in East York.

Two SUVs were involved in a collision at Coxwell and Avenue and Plains Road at approximately 9 a.m. on Monday, Jan. 14.

According to Toronto police Twitter reports, two men fled from one of the vehicles involved in that collision.

One of the men boarded a TTC bus, and when nearby police officers attempted to arrest him he struggled with them and fled. One man is in custody, but police are now conducting an intensive search in the area west of Coxwell Avenue between Cosburn Avenue and O’Connor Drive for the man who fled from the bus.

The man police are searching for is described as having curly hair and wearing blue jeans.

Also, a Toronto police car responding to the call was involved in a collision with another vehicle at Coxwell Avenue and Memorial Park Avenue shortly after 9 a.m.

Coxwell is presently closed between Cosburn and Mortimer.