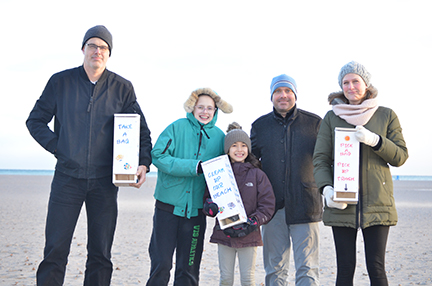 Tired of the garbage piling up along Woodbine, Kew and Balmy beaches, six local residents have created a project that they hope will offer a solution to the problem.

The Not Your Typical Cleanup Project is launching its first event this Saturday, Jan. 12, at Woodbine Beach.

On that day, members of the group plan to help address the litter problem by setting up wooden boxes with garbage bags inside for families and residents to use while in the area.

The long, wooden boxes will be installed on poles where beach-goers can pull a garbage bag out from the bottom and gather their trash. Each of the boxes also have sayings such as ‘Clean Our Beach’ and ‘Love Your Lake’ written on them.

Dora Attard, one of the team members, explained that these boxes will help lessen the amount of litter being left on the beaches by visitors.

“People can see these boxes with the garbage bags and pull them out, and they can do their own beach cleanup while they’re there,” Attard said.

She was asked a couple months ago to be a part of this new project with the same goal. The difference, however, is that the Not Your Typical Cleanup Project focuses on residents creating ownership of the public spaces.

Since the legal garbage bins are placed far away from the actual beaches, many people tend to leave their trash along the shoreline, she said. In some cases, the trash will even end up in the lake.

“A lot of the garbage is left overnight and it ends up in the lake from either the wind or rain,” Attard said. “It ends up in the water. By the time the cleaners come in the morning, it’s gone.”

The majority of the trash Attard has seen consists of straws, coffee cups and water bottles. However, the group hopes the boxes will minimize this.

Members of the project have included not only locals and their children, but other residents of Toronto as well. Attard added that having the team build and paint the boxes together showed their dedication to the cause.

The group hopes to expand the project to other beaches if the idea takes off. However, it will be launching at Kew, Balmy and Woodbine Beaches in the meantime.

“The goal is just instilling a sense of ownership,” she explained. “We need permanent change for all of the litter on our beach and this is huge step.”