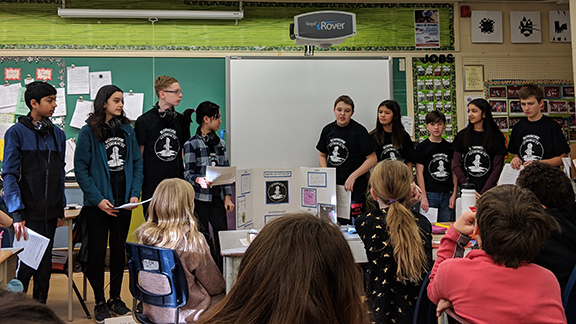 Bowmore Public Schools Grade 7 and 8 robotics team, The Astrobauts, presents their project to fellow students. The team will be competing in the provincial FLL championships this Saturday, Jan. 12, in Oshawa. Photo: Submitted.

The Grade 7 and 8 robotics team from Bowmore Public School will be competing at the FIRST Lego League (FLL) provincial championships this Saturday, Jan. 12, at Durham College in Oshawa.

The team, which calls itself The Astrobauts, earned the trip to the Ontario championships by finishing in the top five at an FLL competition held by the Toronto District School Board at Runnymede Collegiate Institute on Dec. 8.

Thirty teams took part in that competition in December, and the squad from Bowmore was second overall.

At the Runnymede competition, teams were asked to do three things: present a project that they came up with that helps astronauts in space overcome a physical or social problem; create a Lego robot and program it to do the related space missions on a game board; do a teamwork-based challenge assigned by the judges.and present it to the judges.

After all of this, the judges chose five teams to move on to this Saturday’s provincial championships. The Astrobauts team made up Grade 7 and 8 students was second overall for all Toronto District School Board teams at the competition.

They are one of two teams where Bowmore students are represented. The other team is made up of Grade 4, 5 and 6 students: The Guardians Of The Galaxy.

The FLL challenges teams of students from around the world to come up with solutions to real world problems using robotics and technology. Teams participating must design, build and program their robot using Lego Mindstorms technology and compete on a table-top playing field.

The Astrobauts identified the need for easy access to water while in space, and came up a system for extracting water from the moon. They called it the LOW method: Lunar Obtaining of Water.

At the TDSB championships, the Bowmore students impressed the judges with their project and the research they put into it. As part of the project, The Astrobauts interviewed people such as Dr. Nathalie Ouellette, an astronomer at the University of Montreal, and Dr. Sarah Mazrouei, a lunar
crater expert from the University of Toronto.

From this research, The Astrobauts learned that their idea of extracting water from the moon has been thought of and talked about before and that it is completely viable.

The Bowmore students has been working hard in preparation for Saturday’s competition in Oshawa, and look forward to sharing their ideas to help astronauts in space.