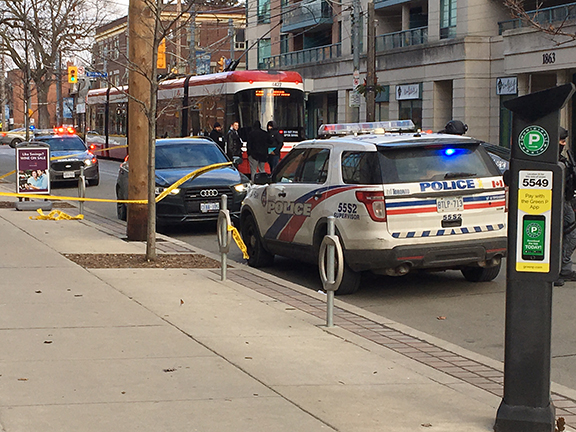 An Audi in which two men were shot sits on Queen Street near Woodbine Avenue on Sunday, Jan. 6, afternoon. Two men were injured in the shooting which took place at Woodbine and Kingston, and two men were arrested shortly afterwards. Photo: Alan Shackleton.

In the wake of the recent shooting at Woodbine Avenue and Kingston Road that injured two men, Beaches-East York Councillor Brad Bradford’s community meeting set for Tuesday, Jan. 22, will be making the issue of safety a priority.

The meeting will take place at the Crescent Town Club, 2A The Market Place (just northwest of Victoria Park Avenue and Crescent Town Road area), starting at 6:30 p.m.

Everyone is welcome to attend the meeting which will discuss a variety of community issues, but Bradford is hoping a discussion on recent violent incidents including the Woodbine shooting and public safety will be key parts of the evening’s discussions.

The Woodbine shooting, which took place in the middle of the afternoon on Sunday, Jan. 6 at a busy intersection, resulted in a massive police response to the area and road closures at a number of locations including Queen Street East and Woodbine where the two men who were wounded drove their car to.

Police arrested two men shortly after the shooting which took place at 2:30 p.m. Those two men have been charged with attempted murder, and police are still looking for two more men in connection with the incident. The two men who were shot suffered non life-threatening injuries.

Bradford said solutions to gun violence in Toronto are not easy, but he wants to hear residents’ ideas and solutions at the Jan. 22 community meeting.

Those planning to attend the meeting are asked to RSVP Peter Woodcock from Bradford’s office at peter.woodcock2@toronto..ca prior to the meeting so organizers have a sense of how many people plan to attend in order to organize refreshments.

In a statement sent to Beach Metro News on Monday, Jan. 7, Bradford praised  area residents and police who helped make a quick arrest of two of the suspects in connection with the Woodbine shooting.

He also referenced a shooting near Main Street and Danforth Avenue on the evening of Dec. 8 in which a man was injured as evidence of continued concern surrounding gun violence in the community.

“The brazen daylight shooting yesterday… has left our community understandably shaken and looking for answers. Paired with the shooting at Main and Danforth last month, it is clear that there is much more we can do to address gun crime in Toronto,” his statement said.

“We greatly appreciate the Province announcing $25 million this summer to address gun violence and gang-related crime as well as the Federal Government committing $7 million to address gun violence in Toronto. But even with this additional funding, it has become clear to me that we need to focus on preventing these acts of violence through programming and outreach.”

Bradford said he will be advocating to expand Toronto’s risk intervention and violence prevention programs to address the root causes of gun crime in the city.

Further adding to safety concerns across Toronto is that as of Jan. 10 there have already been three murders in the city, including a fatal drive-by shooting in Etobicoke last night (Jan. 9) that took the life of an 18-year-old man.

“It is my strong belief that every community in Toronto should feel safe from acts of violence. As we move forward I will continue to work with (Toronto police’s) 55 Division and our Community Partners to understand what I can do as Councillor to ensure our community is safe,” Bradford said in his statement.