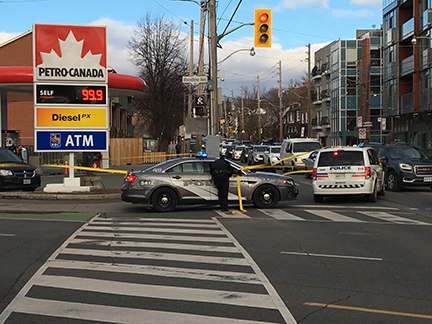 Police investigate the shooting scene at Kingston Road and Woodbine Avenue on Sunday, Jan. 6, afternoon. Two men are facing attempted murder charges. Shown in the body of this story are photos of two handguns Toronto police allegedly seized as part of the investigation.

Police were called to a shooting at the intersection at approximately 2:30 p.m. on Jan. 6.

According to police, an Audi was stopped at a red light, westbound on Kingston Road at Woodbine Avenue, when it was approached from behind by a black Mercedes.

Police alleged the Mercedes came to a stop behind the Audi and a man got out of the Mercedes and approached the passenger side of the Audi. The man had a firearm in his hand and began to shoot inside the Audi, police alleged, hitting two men in the car. After the shooting, police allege a man ran southbound into the residential area, east of Woodbine, south of Kingston.

The driver of the Audi drove southbound on Woodbine, turned westbound onto Queen Street and came to a stop in front of the Wine Rack store, just east of Rainsford Road. They were treated for their injuries at that location, and then taken to hospital.

While that was happening, police alleged that the driver remained in the Mercedes, sped off on Woodbine Avenue, and became involved in a collision on on Queen Street east of Woodbine Avenue. At that point, police said four males ran from the Mercedes. Police flooded the area with a huge response immediately after the shooting and responding officers arrested two of the males who had allegedly fled from the Mercedes.

Rodrigues Sendia, 20, of Toronto, is charged with attempted murder, unauthorized possession of a firearm, and failing to comply with probation.

Ajmain Rahman, 21, of Toronto, is charged with attempted murder and unauthorized possession of a firearm.

Police are continuing to look for two other men wanted in connection with the shooting.