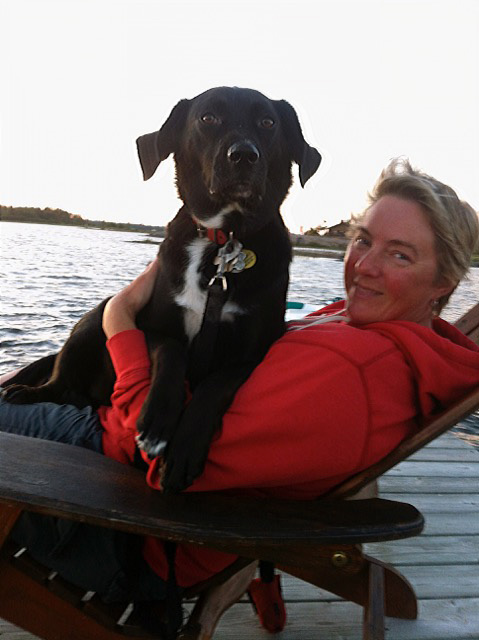 Whenever Linda Pelley would go out to deliver the Beach Metro Community News in her neighbourhood, she would always be accompanied by her loyal four-legged helper who would be by her side at all times.

For the past nine years, Pelley has used the job as a way to train her black Labrador mix, Luca.

It was her work trainer who originally suggested that she should teach Luca to follow her lead and walk up the stairs behind her while on the job.

“I had so many stairs to walk up and down,” she said. “It worked out really well, and she actually learned how to be a good dog. She’s an incredible dog now. She was pretty slow to pick up new rules, let’s say. But she picked it up so fast, how to walk up and down the stairs behind me.”

Pelley adopted Luca from Petfinder, a popular dog-adoption organization based in the United States. Luca was a puppy when she was rescued off the street by volunteers. Her previous dog had passed away after being part of her life for more than 16 years. After a short period Pelley decided she wanted a new dog to be part of her family.

“Honestly, I lasted two months and I ended up looking again, because I have always had a dog in my life,” she said. “I looked on Petfinder and I saw Luca, who at the time was named Angel. I really liked the look of her, adopted her, and decided to change her name.”

Luca had just turned one when Pelley began covering her route for the Beach Metro News. She was a dog with lots of energy. The job would wear Luca out by forcing her to walk all day long to burn off all the energy she had. It also helped to give Pelley a break from Luca’s hyper personality at night.

After nine and a half years, Pelley is giving up the job because she is moving away from the East York- Beaches area. What she will miss the most are the strong sense of community and talking to the friends she made along the way.

“I would bring my dog with me door-to-door with everybody’s papers,” she said. “I know everybody and I talk to everybody, so I could typically do it in 10 to 15 minutes, but it normally takes me 30 to 40 minutes, because I love catching up with everybody.”

During her time delivering papers, Pelley would donate $50 out of each month’s paycheque in Luca’s name, to organizations that helped rescue dogs.

“One of the first times they gave me a bonus, they gave me $50 as a reward,” she said. “I just put it back into dog shelters as a donation. I kept doing this constantly. It was ultimately Luca’s paper route, not mine.”