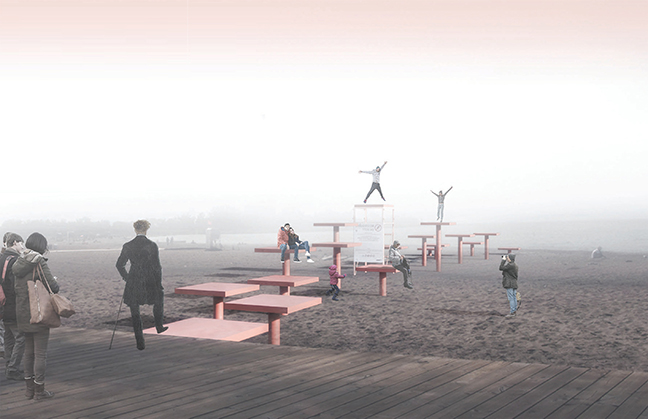 Ground2 by Humber College will be among the six Winter Stations installations along the Beach in the winter of 2019.

Designs from around the world have been selected as the winners of the Winter Stations Design Competition which will be displayed along the Beach this winter.

This is the fifth year for Winter Stations, and the theme for the 2019 installations was Migration. The works of art will be placed at the sites of the lifeguard stations along the waterfront between Ashbridges Bay and Balmy Beach from Feb. 18 to April 1.

Hundreds of submissions were received from around the world for this year’s competition, and the Winter Stations design jury team selected the four winners.

They are Above the Wall, by Joshua Carel and Adelle York of Boston; Mind Station, by Tomas Piotrowski and Lukasz Chaberka, of Warsaw, Poland; The Forest of Butterflies, by Luis Enrique Hernandez of Xalapa, Mexico; and Cavalcade, by John Nguyen, Victor Perez-Amado, Anton Skorishchenko, Abubaker Bajaman and Stephen Seungwon Baik of Toronto.

Those four works will be joined along the waterfront by two student installations – Ground2 from Humber College, and Intuit from Sheridan College.

Each winning submission celebrates Toronto’s winter waterfront landscape and aims to draw people outside to interact with installations, the winter and each other, said a press release by Winter Stations founder RAW Design, Ferris and Associates, and Curio.

Working with the theme Migration,  designers were asked to explore all facets of migration, including the complex social issues that surround humanity’s shaping of our global society, the flight of animals and the exchange of ideas.

“It’s a testament to the appetite for design in this city, as well as to the efforts of our sponsors who step up each year to fund the exhibition. We wanted this year’s theme to continue exploring global events while bringing design and spectacle to the water’s edge. Winter Stations has always been about bringing joy, warmth and conversation to the long, cold Canadian winter landscape.”

In its fifth year, Winter Stations has evolved to include sister exhibition, Ice Breakers presented by Ports Toronto. Ice Breakers is now in its third year and runs from Jan. 19 – Feb. 24, along Queen’s Quay.

Here’s more info on each of this year’s Winter Stations installations:

Above the Wall positions humans, physically and symbolically, above a barrier constructed around the lifeguard stand at Woodbine Beach. In the current global political climate, the idea of a wall as a literal physical boundary between countries is reemerging as a nationalist tool to prevent migration. This installation contests the wall as a productive assertion of sovereignty. As visitors walk between installations, they are encouraged to ascend the staircase along their walk and engage with others that have approached from the opposite side. This unifying experience can help us overcome the physical thing that is meant to divide us. Mind Station – Nowadays everything is fast paced! People’s thoughts are spreading across the globe as fast as our Internet connection. This pavilion, like the network, allows users to lose their physical dimension. People are able to concentrate further on value of thought migration and emotions related with it. Mind Station connects strangers and provides opportunity to break cognitive barriers. The Forest of Butterflies represents the forests of Michocan, Mexico, where year-after-year the insect with the longest migration in the world is received, The Monarch Butterfly. The installation represents a bouquet of butterflies that lived in the forests of Michoacan upon receiving the Canadian Migrant, where the spectators can play, run, dance, chase and hide from the millions of butterflies that paint the forest with orange tones, during the Mexican winter. Cavalcade is an installation that reflects the collective spirit of human movement and transversal. Not just in the contemporary political sense of global migration, but in the consensus that the human quest for a better life is one that is timeless and universal. Cavalcade depicts people migrating towards something better. The spectator is placed in the midst of this movement as their reflection off a mirror at the centre of the installation reaffirms this collective connection.

Ground2 is an experiential journey of migration that beckons the user to participate in the ever-shifting human and environmental landscape. Built with contemporary materials, the temporary, scattered, structures form a new artificial ground mediating between the linear, safe boardwalk and the fluctuating, undefined, boundaries of water. This dispersed plateau reflects on the near future of the world’s dissolving glacial landscapes that will propel imminent environmental refugee crises. With a natural flow of degradation and designed to reach varying heights, Ground2 prompts users to assess their reformed surroundings as they walk, climb, and traverse the destabilized path before them. Intuit reimagines the lifeguard tower as a migratory species. The proportions of the original tower have been stretched, shrunk and distorted to create a pleasing array of characters within the species. The placement of the chairs in turn suggests a pattern of migration that is at once familiar and satisfying.  Constructed of wood with the concern for the public’s safety uppermost we hope that the viewer will add a playful narrative and offer them the opportunity to engage and rekindle their own memories and stories.