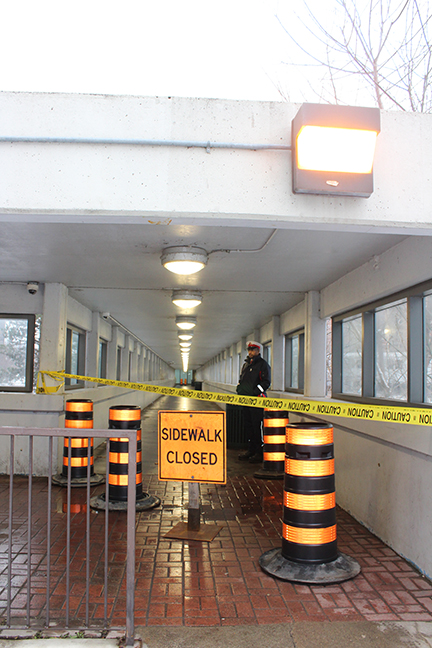 The pedestrian bridge between Victoria Park subway station and the Crescent Town apartments has been closed for urgent repairs. Photo by Alan Shackleton

The City of Toronto has announced that the pedestrian bridge over Victoria Park Avenue which connects Victoria Park subway station to the Crescent Town apartment buildings property has been closed for urgent repairs.

The city owns and maintains the bridge, and in an email to Beach Metro News said the closure is estimated to last for approximately three weeks.

In the email, the city said the bridge required rehabilitation and this work had originally been scheduled for 2019. In advance of that work, the city’s consultant engineer “conducted an up-close detailed inspection and observed that the reinforcing steel within the bridge support structure had deteriorated beyond what was anticipated since in its previous inspection in July 2018” and the decision to close the bridge and begin shoring work immediately was made.

Pedestrians who normally use the bridge to access the subway station from not only Crescent Town but also the Dentonia Park neighbourhood, must now cross at the lights at street level on Victoria Park Avenue under the bridge.

TTC staff were at the ends of the bridge to tell pedestrians they could not use the bridge.

On Thursday, Dec. 13, morning numerous pedestrians were observed making their way down a slippery hill from Crescent Town to Victoria Park Avenue and then crossing the street not at the lights but just north of them.

“It’s a slippery hill, not good for kids,” said one man as he hurried across the road to the subway station.