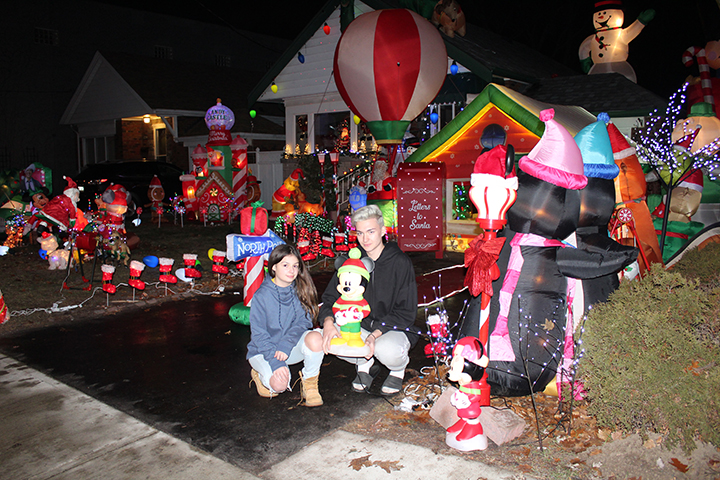 Lodghan and Connor Scotland with some of the many Christmas displays in front of their Kingston Road home. Photo by Ian Kelso.

Along with the giant inflatable Santa, the penguins, Disney characters and Clark Griswold from National Lampoon’s Vacation, what Natasha Scotland likes best about the Christmas display in front of her Kingston Road bungalow is the sounds children make when they stop on the sidewalk to take it all in.

“I just love to see the kids coming up to the house, and I love when I can hear them outside and they are oohing and aahing. I love that,” she said.

Scotland has been decorating her home just east of Fallingbrook Road in Scarborough for at least the past 16 years, and she doesn’t put out displays only at Christmas.

“It’s not just for Christmas that we do it. We also decorate for Valentine’s Day, St. Patrick’s Day, Easter, Thanksgiving and Halloween,” Scotland said. “I love lights, as you can tell.”

While all the displays draw plenty of attention from onlookers, it’s the Christmas display that really brings the crowds out.

One doesn’t know where to begin to look first as there are so many things going on, from music to flashing lights to giant inflatables on the lawn, the driveway and the roof. There’s a Santa’s house that kids can go inside, and even a giant mailbox to drop off letters to him.

Nine-year-old Shaeleen Hopkinson, who was taking it all in with her parents on a recent Thursday night, said she thought the display was great.

“I like the Santa in the house and the candy canes that are in there,” she said.

And that’s exactly what Scotland wants to hear.

“The kids drop off their letters to Santa in the mailbox, and they really seem to like it,” she said.

The size and scope of the display has brought a fair bit of attention to Scotland and her house, and she’s been featured in many different Toronto media including live TV broadcasts from the front lawn.

With so much attention, she also works to help out others through the popularity of her home’s Christmas display. “We’ve collected mittens and blankets for a homeless shelter,” she said.

They have special events to help out local organizations and these are posted on her Facebook page, Kingston Decorations.

Scotland said she started with the holiday decorations because as a kid herself she hated it when the Christmas tree and decorations in her house were taken down and everybody went back to dark, boring winter.

“I hated that feeling, so now we never take the tree down. We’re doing something all year,” she said.

Scotland said that this year’s display would not have been as impressive without the help of her son Connor, 17, and daughter Loghan, 12.

“Without my son, there would have been nothing on the roof,” she said.

The two questions Scotland gets asked most are:

Where do you keep it all? (She has a big shed);

What do the neighbours think? (“I have really great neighbours”).