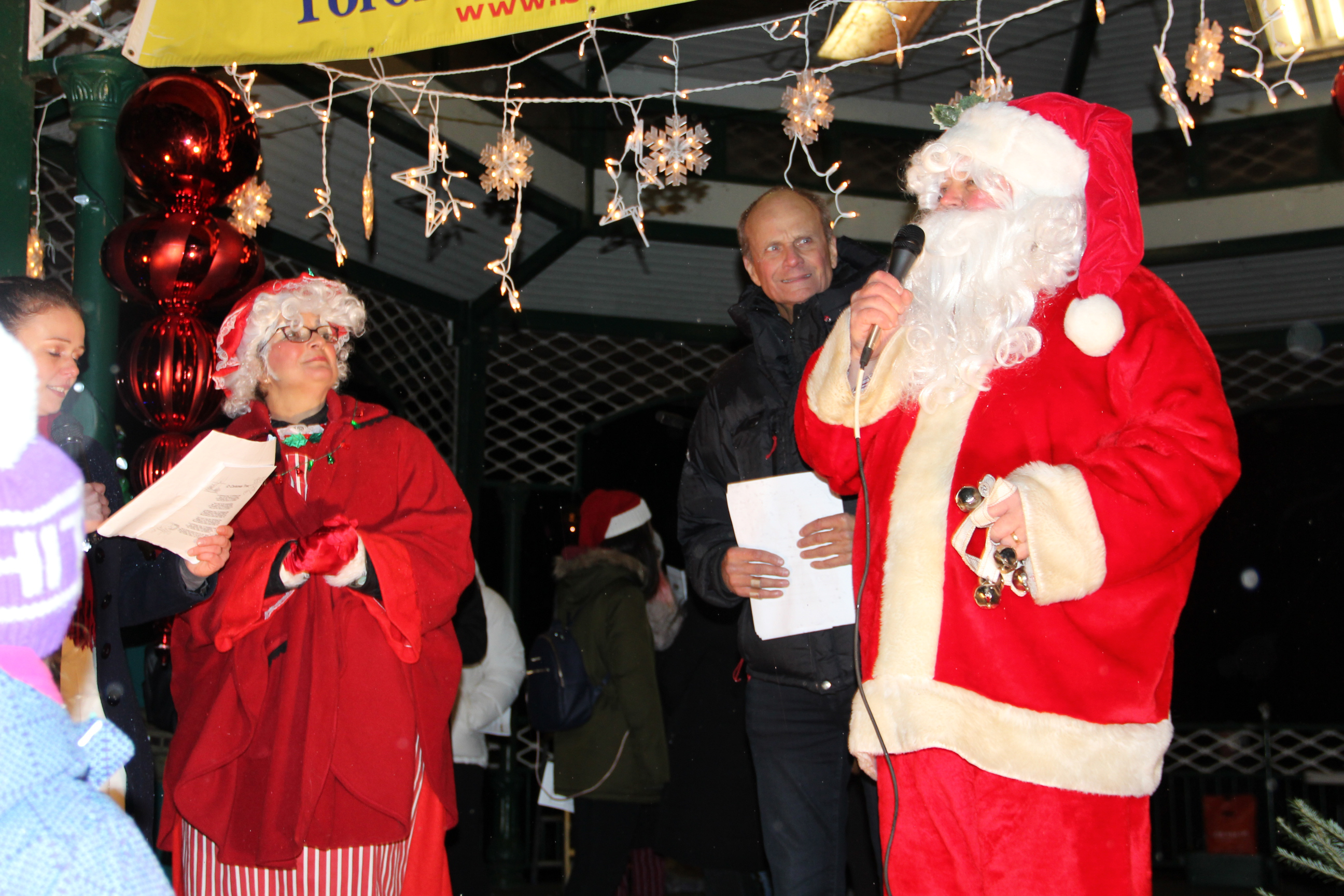 Santa and Mrs. Claus, along with event host Tom Jakobek, prepare to turn the lights on the Toronto and Beaches Lions Club's annual Christmas In The Park Tree Lighting celebration in Kew Gardens. Photo by Nina Rafeek

Santa Claus and Mrs. Claus came to visit young Beach residents anxiously waiting to see them despite rainy weather at Kew Gardens on Saturday evening for the Christmas In The Park Tree Lighting celebration.

The annual event was held on Dec. 1 and presented by the Toronto Beaches Lions Club and hosted by former city councillor, Tom Jakobek. The hour-long celebration was full of cheer as residents sang along with a choir to Christmas classics such as Jingle Bells and Santa Claus Is Coming to Town.

Silvie Blanchette brought her one-year-old twins, Cecelia and Alice, along with her son Gabriel, 4, whose favourite Christmas carol is Jingle Bells.

Charlotte, 9 had just finished her third cup of hot chocolate as she proudly showed off her empty cup. “The singing was the most fun part of the night,” she said.

“It just feels like a community event. You have your local politicians coming up, people from the community and it’s small and very festive,” said Charlotte’s mother, and long-time supporter of the Lions Club, Alicia Farrow.

Beaches—East York MP, Nathaniel Erskine-Smith and MPP Rima Berns-McGown mingled and took photos with the children and residents. They also went on stage and spoke the importance of the Toronto Beaches Lions Club to the surrounding community.

Beach resident Natalie Shivgulam came with her son Cole, 4 whose favourite part of the evening was dancing with the Beach Buddy teddy bear mascot. “We’re here to celebrate the season of Christmas and we’re really excited that it’s December 1st and thought this would be a great way to kick off December,” she said.

As the rain started to fall towards the latter part of the event, children grew anxious as they waited for Santa. “I think Santa might be lost, who has a phone?” Jakobek asked the crowd. “Hold it up with the screen light on, so we can show Santa where we are!”

Moments later, children’s faces lit up along with the Christmas tree when Santa and Mrs. Claus joined the festivities.

“It’s a really worthwhile organization, it’s a great community event and I’ve been doing this for about 15 years now,” said Maria Dawson, who is one of the event volunteers and organizers.

She said donations collected at the event will go towards members of the community in need of financial or medical assistance. The money raised also funds the entertainment for events like this and the Easter Parade.