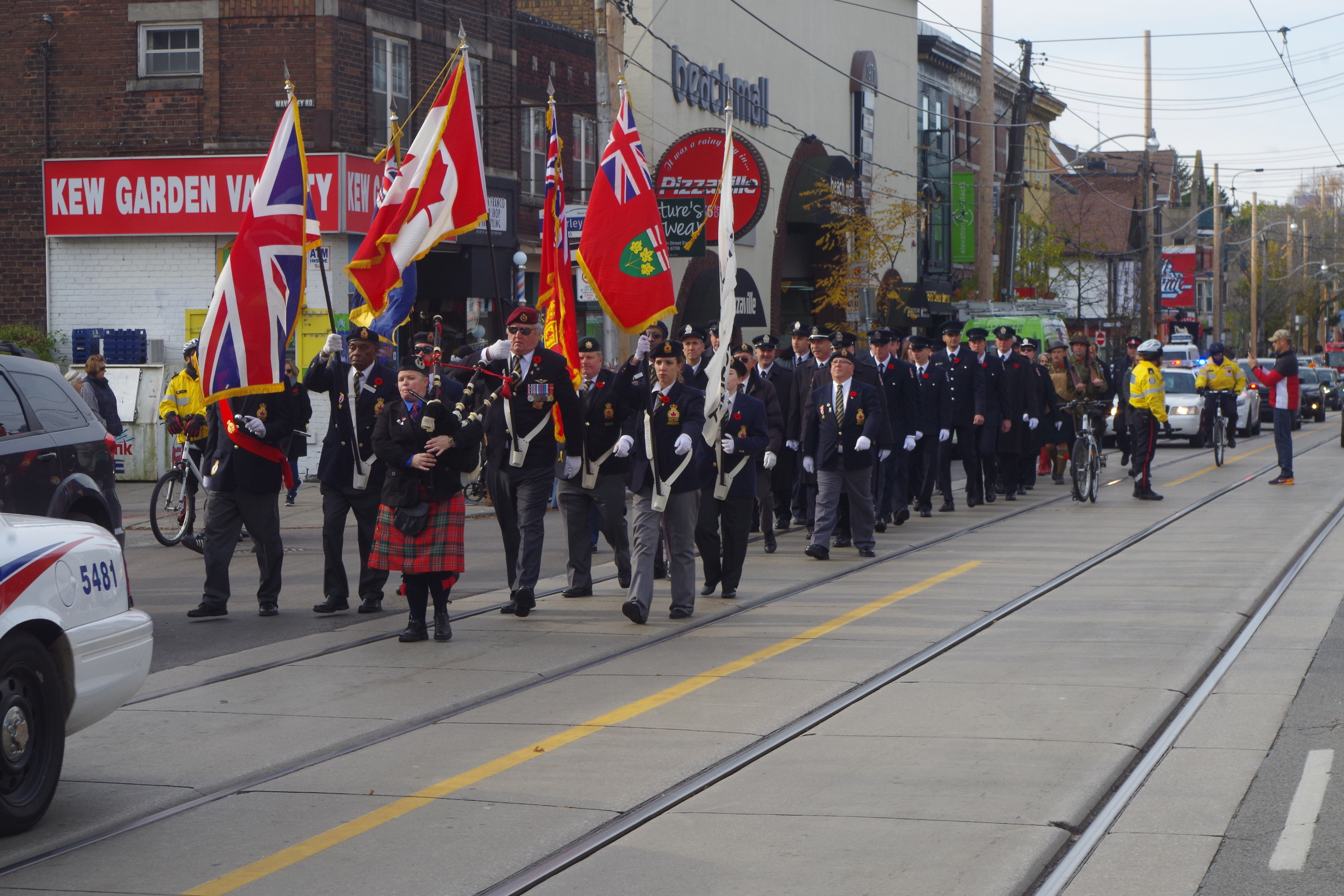 A huge crowd turned out on a cold but clear Sunday morning to mark the 100th anniversary of the end of the First World War and observe Remembrance Day at the cenotaph in Kew Gardens.

Many in attendance felt it was especially important to attend this year’s service as it marked exactly 100 years since the Armistice was signed on the 11th hour of the 11th day of the 11th month in 1918 to end the First World War.

Local residents Louis and Jennifer Tinker brought their children Eve, 6, and Judd, 8, for that very reason.

“We try and attend every year if we can, and the kids have a ceremony at school, but with this being the 100th anniversary of the Armistice this year it was important to have the kids come out with us,” said Jennifer. “It’s so they understand why we have our freedom.”

Jennifer and Louis also bring their kids in honour of their own grandfathers, and their children’s great-great grandfathers, who both served in the Second World War.

“We’re here so we can remember the soldiers who fought for us and kept the world in peace,” added her brother Judd.

Glen Ames Senior Public School student Maddy McQuiston was at the ceremony with her mom Kim, and dropped off a specially made wreath at the cenotaph.

Last year, Maddy had collected poppies left over from the ceremony at her school and decided to make a wreath of them, rather than having them just lay on the school’s gym floor.

“I didn’t think the poppies should be just left in the gym so I got a wreath rack and made it into a wreath,” she explained. “A lot of soldiers fought for our lives and freedom, so I wanted to make sure we showed respect to them.” Maddy will be graduating from Glen Ames this year, but said she had talked to the principal and she believes the gathering of the poppies at the school to bring to the Kew Gardens cenotaph will now become a tradition.

Showing their respects on Remembrance Day is important to the entire McQuiston family, said mom Kim whose grandfather Benjamin Fox was in the Second World War.

“He was on Juno Beach on D-Day, June 6,” she said of her grandfather who served with the Cameron Highlanders and then the Black Watch.

Also at Sunday’s ceremony was Catherine Bailey, a friend of the McQuistons and a local Girl Guide leader with 144th Sparks. She was at Kew Gardens to remember her grandfather Robert ‘Bobbie’ Baker and father John ‘Jim’ Bailey who served in the First World War and the Second World War respectively.

“I’m here for my grandfather Bobbie Baker who was in World War One with the Canadian Army in Belgium in the trenches,” said Bailey. “He was gassed, but he survived.”

Her grandfather lost his teeth as a result of being gassed, but came back from the war and worked for the Toronto Transit Commission for 42 years before he died in 1967.

Her father was originally with the Pictou Highlanders from the Maritimes, and ended up serving in Burma where he was one of the only survivors after the plane he was in was shot down. Both the pilot and co-pilot were killed in that crash. “We have to remember them,” Bailey said. “We wouldn’t be here if not for those people.”

Also at Kew Gardens for the ceremony was Jeff Train, who served in the military with the Royal Canadian Dragoons for 12 years. He was also a private defence contractor who did work in Iraq and Afghanistan.

He said his time in Afghanistan was extremely difficult as he attended the ramp ceremonies to load the planes that brought home the coffins of both Canadian and American soldiers who had been killed.

Train said the sacrifice made by Canadian soldiers who served in Afghanistan is not properly recognized, especially when it comes to the paying of military pensions and the way they are treated by various government agencies.

“I’m here to honour my friends,” he said. “That’s who we were fighting for.”

Sunday’s ceremony in Kew Gardens was hosted by Royal Canadian Legion Branch 1/42 and saw speeches by Branch president Shelly Lyons, and also by Jim Le Roy of Branch 11. The service included prayers, hymns, a reading of In Flanders Fields, and the laying of wreaths.