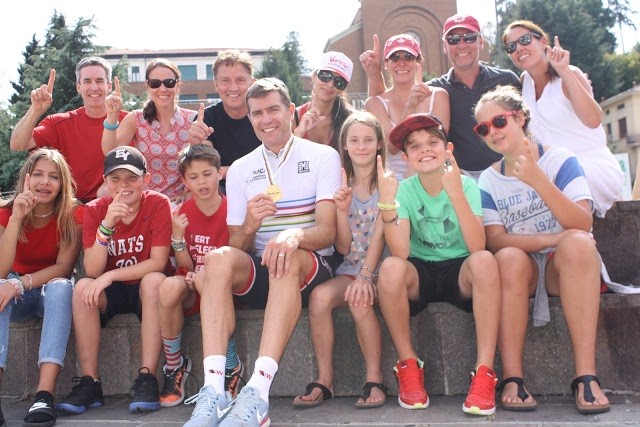 Bruce Bird picked up two gold and a silver medal at the Union Cycliste Internationale (UCI) Gran Fondo World Championships in cycling in Varese, Italy earlier this month, and he had his own Canadian cheering section to boot.

A Beach resident, Bruce took up cycling a decade ago and has risen in the rankings ever since.

He previously won Age Group World Championships in the Cycling Road Race event in 2014 in Ljubljana, Slovenia and again in 2017 in Albi, France. Competing in the men’s 50-54 age category over the Labour Day weekend, Bruce won a gold medal in the time trials, a silver medal as part of the four-person relay team representing Canada, and another gold medal in the final UCI Gran Fondo road race.

Bruce was the only Canadian to place in the individual events. For his time trial, he ranked thirteenth among the fastest racers of the day across all age groups of the 563 riders who finished the race, winning the gold medal in his age group. In the road race, Bruce outsprinted his Italian break-away partner to take the World title. The 50-54 men’s field had 406 participants who earned the right to take part in the championships by finishing in the top 25 per cent of their age group in one of 21 qualifier events held worldwide. The Canadian event (The Blue Mountains Gran Fondo) is held up in The Blue Mountains, Ont., which Bruce organizes each June.

Twenty-five teams were entered in the relay, 18 competed, and two were disqualified, said Bruce’s friend and neighbour, Deborah Wilson.

Deborah ventured to Italy along with several of Bruce’s friends and family members to watch him race.

“There were 18 of us who travelled to Varese, Italy, to cheer on Bruce,” she said. “Bruce is incredibly dedicated to his sport and has had his share of bumps and bruises along the way. It was very gratifying to see his hard work pay off and see Canada represented among some of the most accomplished cycling countries in the world.”

“I do it because I love it!” said Bruce in a phone interview with Beach Metro News.

Bruce plans on participating in the same events in Poznan, Poland in 2019 and in Vancouver-Whistler B.C. in 2020.