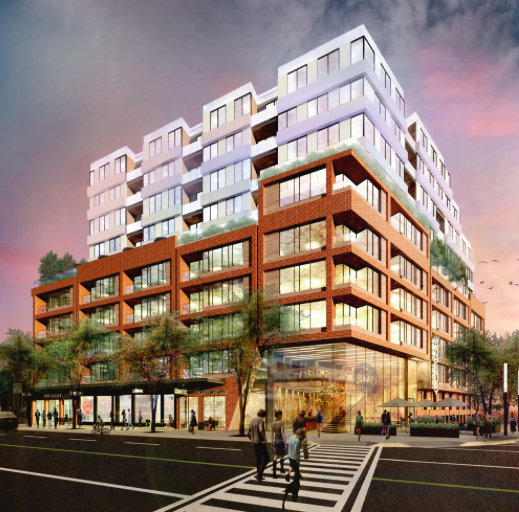 Mixed use residential and commercial building coming to the northwest corner of Kingston Road and Manderley Drive. Photo: Core Development

A newly proposed 10-storeyresidential and commercial building is coming to the northwest corner of Kingston Road and Manderley Drive, located at the heart of Birch Cliff Common.

The mixed use building will be developed by Core Development Group and it will replace the unoccupied one level commercial building that stands there today.

The architects created the design of the proposed building to replenish and rejuvenate the current properties and surrounding stores that are in a “state of economic decline” since the early 1990s, according to the City of Toronto.

Also, the city has made the stretch of Kingston Road a priority, as outlined by the Kingston Road Revitalization Study. Though the neighbourhood is rich with different retail shops, restaurants, parks, and a view of the lake , this makes it a prime location for a multifunctioning building.

Bryan Nykoliation, president of Core Development Group, referred to the main intersection of Kingston Road and Manderley Drive as the Yonge and Bloor of the Birch Cliff area and said this development is going to bring character and quality to the neighbourhood.

The building is also expected to bring more business to the area and an option for residents who want to downsize from a house to a condo but don’t want to leave the family friendly neighbourhood.

The condo building is expected to accommodate 121 residential units, which will comprise 19 one bedrooms, 89 two-bedrooms, and seven threebedrooms.

This isn’t the only development that will urbanize the Birch Cliff and surrounding area. Core Development Group is also building Birchcliff Urban Towns on the southeast corner of Kingston Road and Birch Cliff. The towns will offer 52 modern suites near retail shops, restaurants, parks and the beach.

Another project in the works is called the Clonmore Urban Towns located north of Kingston Road, on Clonmore Drive, at Queensbury Avenue. The town homes offer 118 suites at close proximity to the north of Danforth and close to the beaches boardwalk.

“We loved the location and we want to bring the quality of the neighbourhood up and by doing so, retail shops, restaurants and parks will benefit as well,”says Nykoliation.

More information of dates can be found on https://coredevelopment.ca