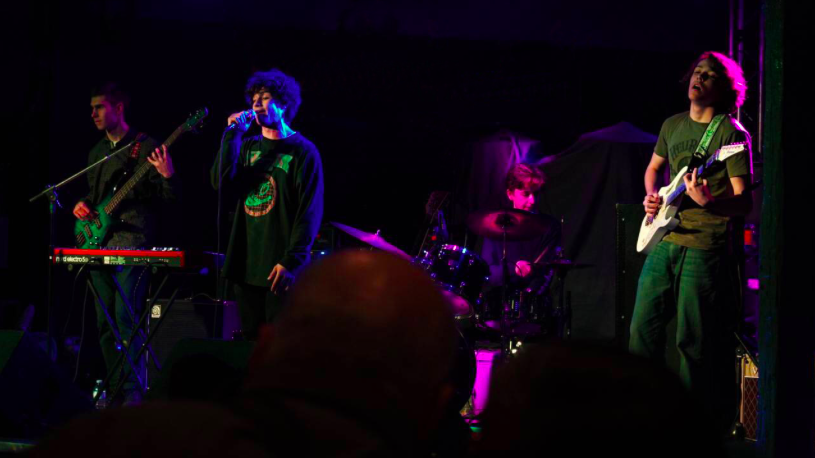 Locally Developed, the name of a new band from the Beach, has just released its first album entitled Dime.

The members include high school students, Alex Shuell on bass, Colin Lafaury on drums, Jonny Bojin on vocals and keyboard, and Max Pilchner on guitar, all 16.

All four members of the band have had years of musical training refining their respective instruments. Pilchner is a self-taught guitarist who learned to play from YouTube tutorials; Lafaury on drums, came into the band with 10 years of classical and jazz piano training; Shuell is also self-taught, having played the bass at school for a few years after nine years of piano training; and Bojin has been singing and playing the piano since childhood. The creation of the band has inspired and motivated them to improve on their instruments.

On their official website, the band says they like to combine and blend many styles “to create a new contemporary sound that defies simple explanation with influences from The Red Hot Chili Peppers, Dave Matthews and Maroon 5.”

Coincidentally, the members all knew each other at some point before forming the band and stepping on stage together for their first official event at The Rockpile Bar and Nightclub in Etobicoke on March 31. The band sold over 50 tickets and left audiences raving. They continuously receive support on social media, with nearly 2000 followers on Instagram and growing, kickstarted by the recent release of their first music video for their first song release, “Dime,” which was directed by Morgan Kobayashi and Ryan Grace. The video has been viewed over 1700+ times in less then three days.

The band is currently self-managed; they do everything themselves themselves, from creating original music to managing their social media and promotion as they see music as a career path. Their debut album Dime features 10 original tracks recorded at Revolution Recording studio and it was mastered by Joan Carvalho Mastering, both in Leslieville.

Dime can be found on Spotify, iTunes, and Apple Music.

More about the band can also be found on a podcast they did with Koncert Katie.