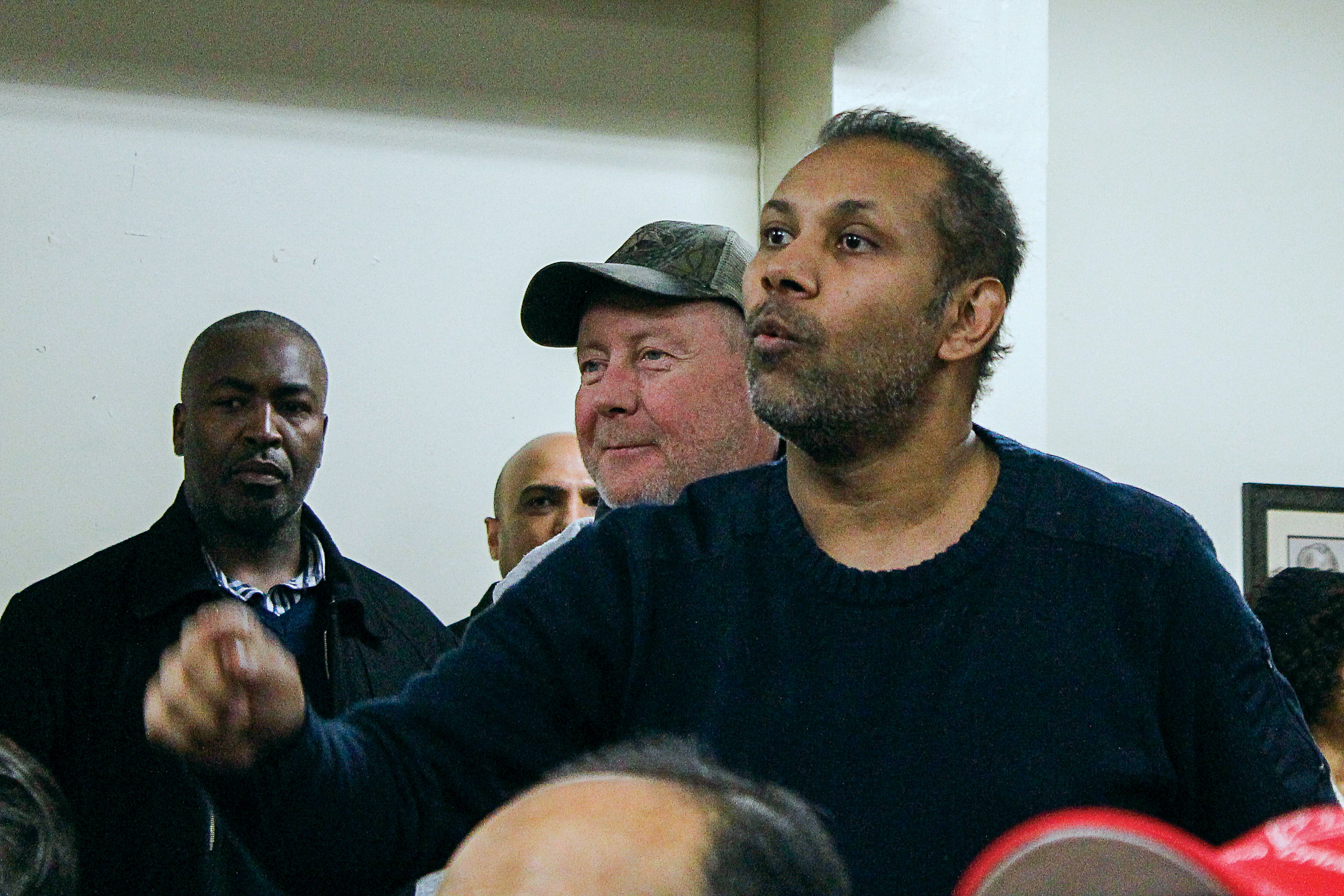 At top, a man, who was later escorted out of the room, shouts at the panel during last month’s anti-racism town hall at Grant African Methodist Episcopal Church, which was co-hosted by Beaches-East York MP Nathaniel Erskine-Smith, below, and Beaches-East York MPP Arthur Potts. PHOTO: Josh Sherman

The police were called to what was supposed to be an anti-racism town hall last month at Grant African Methodist Episcopal Church as hecklers repeatedly interrupted the event sparking heated interactions between attendees and politicians.

Hosted by Beaches-East York MP Nathaniel Erskine-Smith and his provincial counterpart, Arthur Potts, on Feb. 22, the public meeting in the Beach was meant to address racism-related topics such as police carding and motion M-103, a private members bill addressing Islamophobia.

Mississauga-Erin Mills MP Irqa Khalid, who co-sponsored M-103, and MPP Michael Coteau, the minister responsible for anti-racism, shared the stage with Erskine-Smith and Potts to share info and take part in a scheduled Q&A.

But early on it became clear a handful of the 150 people who had come to the church had other ideas about how the evening should unfold. Khalid’s presentation was derailed by shouted demands for a definition of Islamophobia, leading to a call to 55 Division.

“The police are on their way,” said Erskine-Smith after the verbal altercation broke out. “And they are going to escort a number of individuals out as I expressly said multiple times, don’t interrupt, act like an adult—this is a safe space for all of us to have a conversation,” he added.

While at least one heckler did leave the event before its scheduled 8:30 p.m. end, the police never did enter the church’s basement, where known white supremacist Paul Fromm watched events unfold.

Erskine-Smith suggested the lack of 55 Division presence at the event was no oversight, given some of the discussion was to centre on carding, a practice which has been routinely criticized as racist.

Attendees had already been provided with paper to write their questions on and submit—and many did follow instructions during the standing-room-only event.

In writing one asked how to bring people together in a city as diverse as Toronto. Khalid emphasized the role of cultural celebrations and inter-faith groups.

And the question of what Islamophobia is was addressed. “Islamophobia: An irrational fear or hatred of Muslims or Islam that leads to discrimination,” Erskine-Smith replied.

Between disruptions, panelists found the time to note the importance of having uncomfortable conversations about race.

“We have now started to think about the social contract that we have with one another,” said Khalid.

Potts followed up her remarks. “To the point—the uncomfortable conversations, you know, we’ve had that in the mental illness space for decades, and through a whole series of very positive movement, people are now talking about mental illness and mental health, it has been very productive. We have the same issue here,” he said.

Earlier in the evening, local activist and Liberal consultant Lisa Kinsella spoke about she and her husband Warren’s legal battles against Your Ward News, whose editor and publisher are facing charges for willfully promoting hatred against women and Jews.

“This is a marathon, it’s not a sprint. And we must keep at it. Everyone has the ability to help,” she said.

Around midnight, Erskine-Smith addressed what had unfolded hours before. “To see such hate so close was jarring, upsetting, and certainly made my blood boil,” he wrote in a Facebook post. “I can’t imagine experiencing such hate as a minority,” he said.

However, he also noted the hecklers were vastly outnumbered and that “important questions” were answered. “The vast majority of people in attendance were respectful and wanted a constructive conversation. And we did get a good amount of that.”