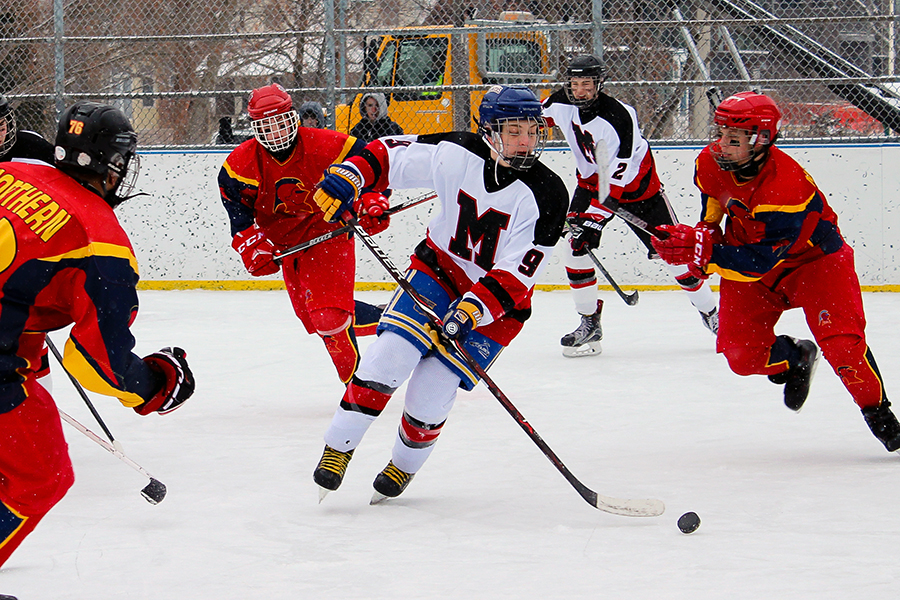 Malvern’s Jake Gallant netted the winning goal in the eighth round of the shootout, lifting the Black Knights to a 5-4 victory on a snowy afternoon in the Beach.

BELOW: See photos from the game

“Both teams were battling and playing extremely hard to win,” he added.

As the snow piled up, it became tougher to score, the coach said. The teams were tied 4-4 at the end of the second and remained deadlocked until late in the shootout.

“To win with your eighth shooter I think was the highlight of the game,” said Salvatore.

Inspired by the NHL’s outdoor Winter Classic, the lakeside game was a way to draw attention to Malvern’s junior hockey time, which is made up of Grade 9 and 10 players and is competing in its first Toronto District Secondary School Athletic Association season.

Before, Malvern only had a varsity team, and it was tough for younger players to make the cut, Salvatore explained.

North Toronto’s Northern SS was picked as an opponent because of the team’s performance this year.

So far this season, Northern’s junior team is undefeated after seven games and leads the league with 14 points. Malvern is in second with 10 points and a record of five wins, two losses, and zero ties.

“We were just kind of the top two teams in the league, so we thought we’d invite the team that would give us the most competitive game,” said Salvatore.