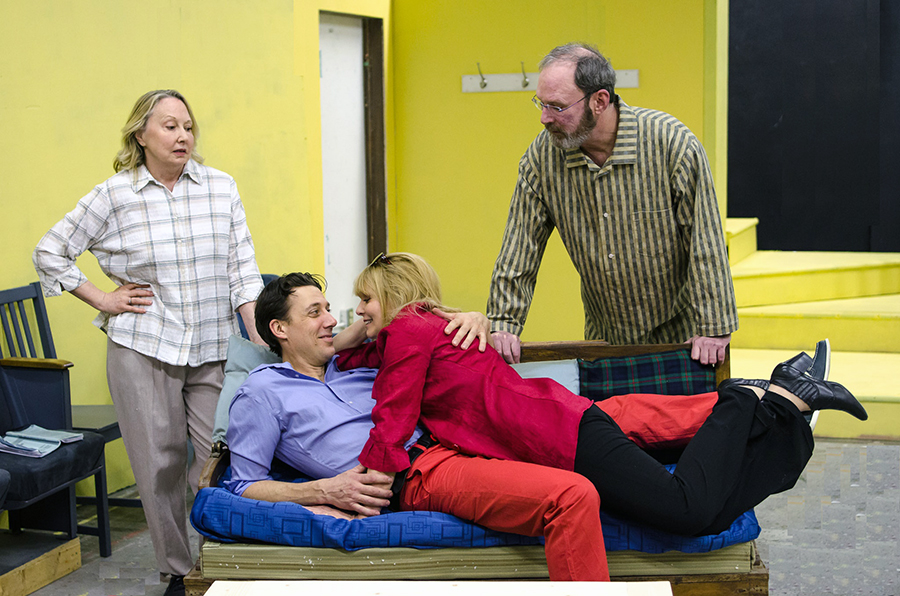 ‘Vanya and Sonia and Masha and Spike’ by the Scarborough Players PHOTO: Thomas Kowal

Here are some of the confirmed acts:

On Friday, Feb. 23 Paul James is at the Balmy Beach Club and Denis Keldie and Carlos Lopes are at the Outrigger.

Both nights, Friday, Feb. 23 and Saturday, Feb. 24, Conor Gains plays Castro’s Lounge, the Fraser Melvin Band plays The Grover, Paul Reddick is at Hogtown Smoke, Sugar Brown & Bharath Rajakumar play The Stone Lion, Mr. Rick is at the Gull n’ Firkin, Clint Ryan and the Burgess Brothers are at Breakwall, Michael Keith plays Beach Love, Lotus Wight is at the Porchlight, and Jeni Thai Nolan is at the Gastro Pub.

For more acts and specific times, keep an eye on the event’s Facebook page: https://www.facebook.com/coldweatherbluesfest/

Directed by Katherine Turner, the comedy, which originally opened on Broadway with David Hyde Pierce and Sigourney Weaver, features local talent who will be familiar to audiences who saw the Players’ sold-out production of It’s A Wonderful Life in December.

“The story centres around a zany family of siblings,” writes Erin Jones, director of publicity for the theatre program. “Successful movie star Sonia shows up at the family home with her new younger boyfriend Spike and finds her siblings Vanya and Sonia stuck in a rut. Old jealousies and resentments are stirred up as Sonia has a shocking announcement. Add a mystical housekeeper and an aspiring young actress to this mix for more hilarity.”

The next Jazz and Reflection at Beach United Church is an “Old School Gospel” featuring Jake Hiebert, a Canadian musician with a following world-wide. Known mostly as a band leader and songwriter, he is also a passionate vocalist and guitarist who plays in bars and bistros, restaurants and music venues across Southern Ontario.

Hiebert has been singing gospel music since he was a young person, but took a keen interest in old time American Gospel and Spirituals about 15 years ago, while playing swing blues and traditional jazz in New York City.

Hiebert takes the stage at the Beach United Church, 140 Wineva Ave., at 4:30 p.m. on Saturday, March 3. More infomation at http://bigrudejake.ca/about/

On the 4th Saturday of every month, Hope United Church highlights a local jazz musician or group as part of the Jazz Vespers series, open to people of all ages. This month, The Eighth Street Orchestra graces the stage at the Main and Danforth house of worship on Feb. 24 from 4:30 to 5:15 p.m.

Then, join Toronto Winds and conductor Dylan Rook Maddix on a journey through the musical landscape of Ontario on Feb. 27 from 7:30 to 9:30 p.m. This performance will feature a diverse array of works by Ontario based composers Ka Nin Chan, David Jaeger, and Elizabeth Raum as well the world premiere of Sophie Dupuis’ Black Winter and Colin MacMahon’s Divertimento for Harp and Winds featuring OSM Standard Life Competition Winner and CBC Radio-Canada Young Artist Kristan Toczko.

On the first Wednesday of every month, Hope United hosts The Noontime Concert Series, where they invite local talent for a great afternoon of music. This month’s featured artists are The Dark Lake Quartet, consisting of Jamie Godber and Adrian Irvine, violin, Clara Nguyen-Tran, viola, and Benjamin Louwersheimer, cello.

The Dark Lake Quartet was formed in 2017 and comprises of University of Toronto students hailing from all across Canada. Although the quartet is newly formed, they have already performed extensively throughout Toronto, including for the American politician Bernie Sanders during his visit to the city in October. As students at the University of Toronto Faculty of Music, the Dark Lake Quartet has had the honour of representing the faculty in master classes for members of the Cecilia String Quartet, New Oxford String Quartet, and the Musicians of Marlboro. They hope to continue gaining success in the months to come.