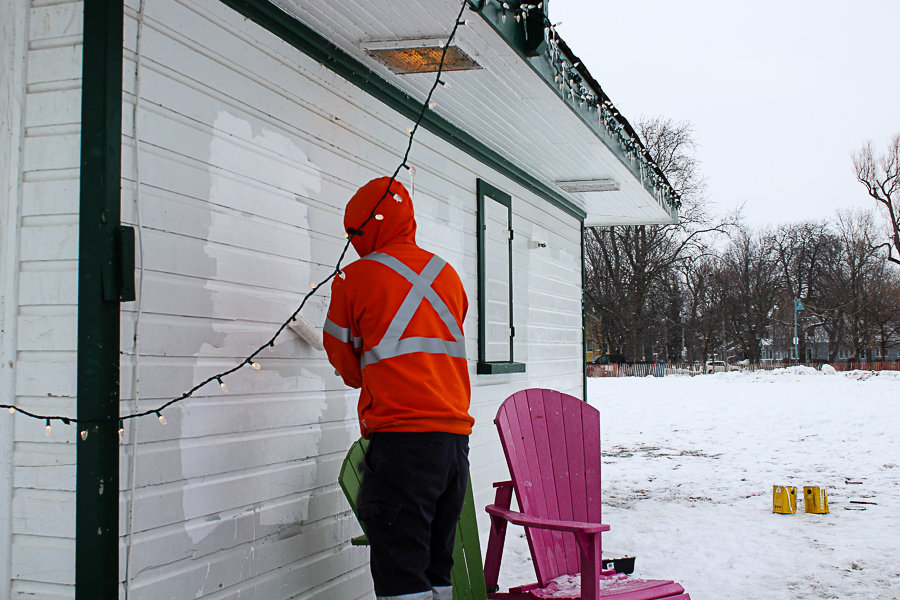 Toronto police are investigating after graffiti, including the image of a swastika and anti-Black slurs, was discovered this morning spray-painted on the historic Leuty Lifeguard Station at Kew Beach.

McMahon said she reported the graffiti, which included crude drawings and graphic slurs and imagery, to the city’s parks department this morning after hearing about the incident from the community. The police were then notified, she said.

Police were on the scene earlier this morning, and this afternoon Toronto Police Services tweeted that the graffiti is being investigated as “hate speech” and that “our hate crime unit [is] supporting divisional investigation.” The Leuty Lifeguard Station falls within 55 Division.

McMahon said the vandalism is “not something that we would tolerate. We’re not tolerating that.”

“Fifty one per cent of Torontonians were born outside of the country,” she noted. “Our motto is ‘Diversity is our Strength.’ We will continue to be proud of that and support and live that mantra, and we will not accept this kind of action,” she added.

McMahon suggested installing surveillance cameras in the Beach to curb vandalism is not the answer. “People who want to do this kind of thing, they’ll find a way,” she explained.

She said people have been offering to clean up the graffiti, which a parks employee was already painting over this morning. “We definitely have seen an outpouring of support,” said McMahon.

In a statement forwarded to Beach Metro, the East Enders Against Racism (EEAR), a local community group, called for immediate action in response to the crime.

“EEAR encourages all residents to call out hateful acts and dismantle oppression in our public spaces, schools and our own homes,” the statement read. “We particularly extend our support to our Black and Jewish community members in light of this incident.”

Beaches-East York MP Nathaniel Erskine-Smith said “the hate graffiti on the Leuty Lifeguard Station is disgusting and has no place here.”

The MP is co-hosting an anti-racism town hall with Beaches-East York MPP Arthur Potts on Feb. 22 at 6:30 p.m. at the Grant African Methodist Episcopal Church at 2029 Gerrard St E.

I have considerable experience with graffiti vandals and their vandalism Here is part of the solution- Catch them, charge them, issue a community service order from the court to have the young offenders clean up their mess and then bill or sue the parents for the clean up costs. To do that the City has to be the complainant and the process takes concentration. When people start paying physical and/or monetary restitution, things change. Also anonymity is empowering, so make sure they get the credit for their work by exposing who they are. My assumption in this case may not be fair, that young people committed the Hate Speech on the Station and it could have been adults. Regardless-make them clean it up and make them pay for the associated costs.

It’s hard racism is. How to educate people
erasing beauty with hate we need more communication about this topic the struggle is not new. B

My Dad (Glenn Cochrane) worked hard for the station, and would be very unhappy about this.

Yes your Dad did! In fact I worked with him and he was a Prince of a man! And I MISS HIM!

He and others put in considerable continuous effort to keep this structure in a state of good repair and your Dad was instrumental in raising funds for such things as a new roof.

The antisemitic and racist graffiti on the Leuty Lifeguard Station is indeed an affront to the community and should be condemned. What is also regrettable is the proclivity of some Beach residents to dismiss this hate crime as a ‘teenage prank’ carried out by people who don’t know any better. As many of us in this community know there is a history to antisemitism and racism in this community. I would encourage people who would characterize this heinous act as mere mischief or nonsense to consider the feelings of those are are under attack by such hate speech. The Beaches Hebrew Insitute on Kenilworth is not far from the Lifeguard station. As well there are many people of colour in this increasingly diverse neighbourhood. It doesn’t matter whether the perpetrators are 16 or 60 such acts need to be dealt with as the hate crimes they are. thank you

They need to be held accountable by the courts. Bob Murdoch ( above) got it right. The courts see graffiti vandalism as mischief. They will see this issue as a criminal code offense I hope. Typically this will be forgotten in a few months and no one will know if anyone was caught and what the punishment was , if any. Who ‘dismissed this hate crime as a teenage prank”? I don’t think its fair for you to attack Beach residents. It would be better to pick up a paint brush and help with the clean up.

Mary-Margaret McMahon is quoted as saying ““Fifty one per cent of Torontonians were born outside of the country,”. Most Jews and Blacks who live in Canada were born here. They are Canadians! She also is quoted as saying this hate vandalism is “not something that we would tolerate.” Yet on her Facebook page, regarding this incident, not only were some people down-playing it as teenage boredom, but eventually the trolls came out with more hate comments and swastika pictures. Despite emails and calls from our family, these were not removed from her page days later.
It was great to see the outpouring of support from many Beach residents though!